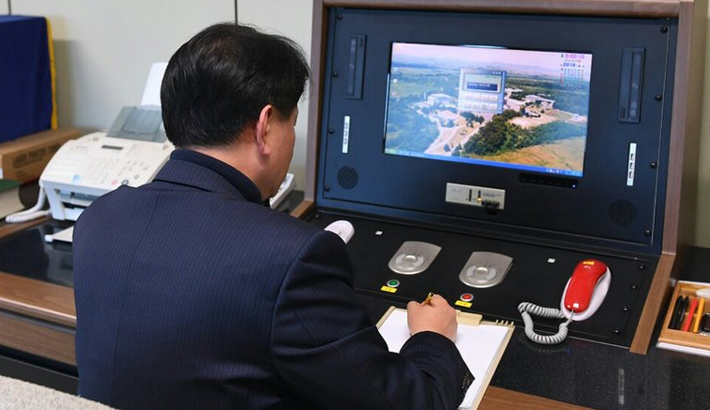 SEOUL: North Korea reopened a border hotline with South Korea on Wednesday, restoring a channel of direct dialogue and signaling a possible thaw in relations between the two Koreas after years of hair-trigger tensions, reports New York Times.

The return of the telephone hotline at the village of Panmunjom, which straddles the Demilitarized Zone, the world’s most heavily guarded border, came two days after North Korea’s leader, Kim Jong-un, made a rare overture to the South.

In his New Year’s Day speech on Monday, Kim continued his nuclear threat against Washington, saying he had a “nuclear button” ready to launch a weapon against any target in the United States. But he also proposed negotiations with South Korea to discuss easing military tensions on the divided Korean Peninsula and his country’s possible participation in the Winter Olympics, which are being held in the South Korean town of Pyeongchang next month.

The fast-moving political developments have given new hope for a warming of ties between the two longstanding enemies.

On Tuesday, South Korea’s president, Moon Jae-in, who has called for dialogue with the North since his inauguration in May, quickly embraced Kim’s offer of talks. His government proposed that high-level negotiators from both Koreas meet at Panmunjom next Tuesday to discuss the North’s Olympic participation.

Seizing on Kim’s outreach, South Korea also urged the North on Tuesday to reopen the Panmunjom hotline so that both sides could start preparations for high-level talks, a proposal the North embraced Wednesday.

“We will connect with the South with a sincere and diligent attitude,” Ri Son-kwon, a senior North Korean official, said Wednesday in a statement on state-run television, announcing the hotline’s reopening. “We once again express our sincere hope that the Pyeongchang Olympics will be successful.” North Korea’s overture was a dramatic reversal of its previous approach to South Korea.

For years, North Korea had dismissed the South as a lackey for the Americans, even though Moon repeatedly urged it to participate in the Winter Olympics in the South and to return to the negotiating table with the United States.

North Korea cut off all lines of communications with South Korea nearly two years ago, when Moon’s conservative predecessor, the since-impeached President Park Geun-hye, shut down a joint industrial complex in the North Korean town of Kaesong. At Panmunjom, which has served as a contact point for the two Koreas for decades, North Korean officials did not pick up the phone when their South Korean counterparts made a daily call to keep the line alive.

When South Korean officials had an urgent message for the North, like the repatriation of North Korean fishermen rescued in South Korean waters, they had to use a megaphone to shout across the border at Panmunjom. On Tuesday, when South Korea proposed high-level talks, there was no way to deliver its proposal directly to the North. So, Cho Myoung-gyon, a South Korean cabinet minister in charge of relations with the North, held a news conference to read out the South’s proposal.

Ri’s television appearance was the North’s response to Cho’s news conference. Ri is chairman of the Committee for the Peaceful Reunification of the Fatherland, a North Korean agency that handles relations with the South. “The reopening of a communications channel is highly significant because it is a step toward being able to hold dialogue anytime both sides want,” said Yoon Young-chan, a spokesman for Moon.