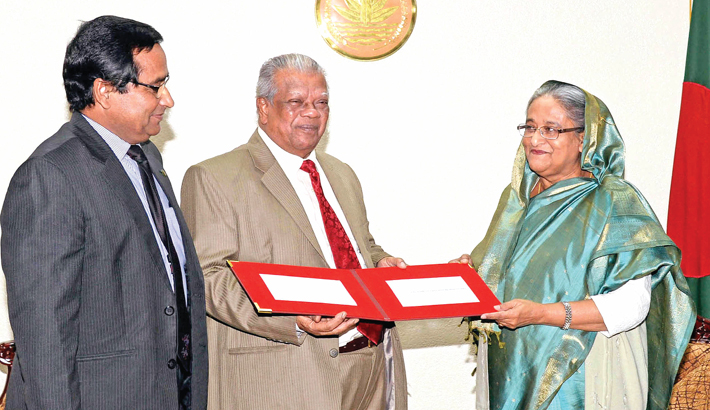 Industries Minister Amir Hossain Amu hands over a cheque to Prime Minister Sheikh Hasina for PM’s Relief Fund at PMO in the capital on Wednesday.

Indian vendors sell vegetables at a wholesale vegetable market on the outskirts of Amritsar on Wednesday. Consumer prices in India rose to a 15-month high in November due to the ongoing seasonal surge in vegetable prices and an unfavourable base effect from last year, breaching the the Reserve Bank of India’s medium term target for inflation.

A Pakistani currency dealer counts Chinese currency for his customer at his shop in Quetta on Wednesday. Pakistan will allow the Chinese yuan to be used for imports, exports and financing transactions for bilateral trade and investment activities, in a move economists said on Wednesday would simplify a massive Chinese investment project.

Islami Bank Bangladesh Chairman Arastoo Khan and its Managing Director and CEO Md Abdul Hamid Miah are seen at a view-exchange meeting with the high officials of the bank at Islami Bank Tower in the capital on Tuesday.

University Grants Commission former Director Md Mofakker inaugurates the launching ceremony of Nirvor.com and Nirvor App at a function at Hangout Restaurant at Dhanmondi in the capital recently.

Bangladesh Development Bank Managing Director Manjur Ahmed poses for a photo after inaugurating the 8th founding anniversary of the bank at the bank’s conference room in the capital on Wednesday.

The 24th annual general meeting of Gas Transmission Company (GTCL) was held at GTCL head office at Agargaon in the capital recently. Shareholders and directors of the company attended the meeting.