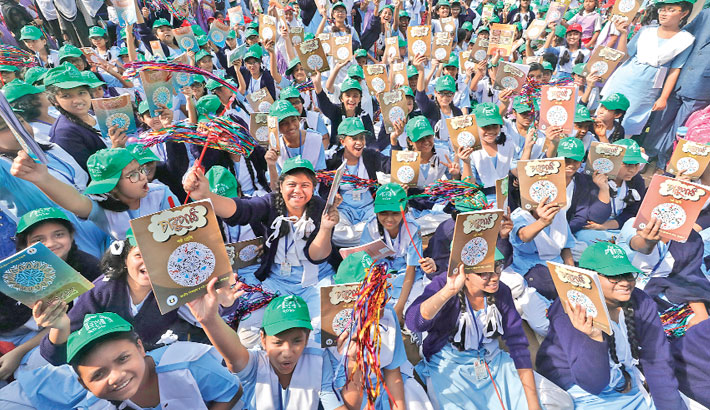 Schoolgirls celebrate the textbooks festival in the capital’s Azimpur Government Girls’ School and College with new books on the first day of the New Year on Monday. — Kamrul Islam Ratan

Nearly 44 million schoolchildren were given free textbooks for their new classes on the  New Year’s Day amid festivity across the country.

Earlier, Prime Minister Sheikh Hasina formally inaugurated the distribution of the textbooks in the capital on Saturday for the 2018 academic year.

A total of 354,290,162 textbooks were distributed among 43,706,895 students at pre-primary, primary, Ebtedayee, secondary, Dakhil and technical levels.

Schoolchildren thronged their educational institutions across the country amid huge enthusiasm and excitement to take new books for their new c lasses.

They celebrated the textbook distribution ceremony through receiving the books.

Addressing the book festival, Nahid said, “This (festival) is the outcome of the government’s sincere commitment to give textbooks on the first day of the New Year 2018.”

He also said Bangladesh has set a rare example in the world through distribution of free textbooks among large number of students on the first day of January.

Secretary of Secondary and Higher Secondary Education Division Md Sohrab Hossain, Secretary of Madrasah and Technical Education Board Md Alamgir and senior officials of the Education Ministry, among others, were present on the occasion.

Primary and Mass Education Minister Mustafizur Rahman said the country’s development will not possible without progress of primary education.