PM on 3-day Visit to Cambodia

11 instruments to be signed today 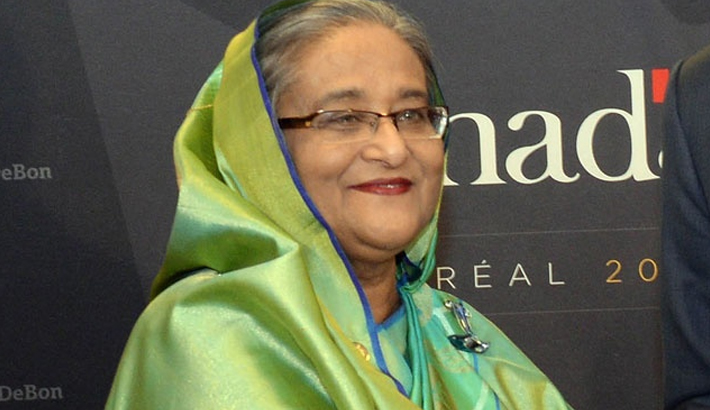 Official sources said nine MoUs will be signed on formation of a joint trade council, boosting coordination in implementation of sustainable development goals (SDGs) by 2030, labour and vocational training, information and communication technology, tourism, preservation of war history and memorabilia, expansion of fisheries and aquaculture, and investment.

Bangladesh Institute of International and Strategic Studies and Royal Academy of Cambodia are expected to sign an MoU to ensure collaboration at the academic level.

Bangladesh has agreed to rename an important street in its capital Dhaka after the founding father of Cambodia.

The Park Road in Baridhara Diplomatic Zone will be renamed after Norodom Sihanouk, the late king of Cambodia.

The Bangladesh premier is scheduled to hold official talks with her Cambodian counterpart Hun Sen today.

Before the official talks, both the leaders will have a tete-a-tete.


Sheikh Hasina left for Cambodia on Sunday at the invitation of Hun Sen.

A VVIP flight of Biman Bangladesh Airlines carrying the premier and her entourage landed at Phnom Penh International Airport at 12:30 local time.  A red carpet welcome was accorded to the premier on her arrival at the airport.

A Cambodian girl presented a bouquet to the premier when she alighted from the aircraft, while Bangladeshi citizens living in Phnom Penh greeted her by waving Bangladesh national flag.

After the reception at the airport, the Bangladesh premier was taken to Hotel Sofitel in a ceremonial motorcade. She will be staying at the hotel during her visit to the country.

The road from the airport to the hotel was tastefully decorated with the national flags of the two countries as well as the portraits of Sheikh Hasina, the Cambodian King and the prime minister.

In the afternoon, the Bangladesh premier paid rich tribute to the martyrs of Cambodia by placing a wreath at the Independence Monument.

After placing the wreath, the premier stood in solemn silence for a while as a mark of respect to the martyrs.

A smartly turned-out contingent drawn from three services of the Cambodia gave a static guard of honour to the Bangladesh premier, while bugle played the last post.

Independence Monument was built at Phnom Penh in 1958 to memorialise Cambodia’s independence from France in 1953. The lotus-shaped monument was designed by Cambodian architect Vann Molyvann.

Later, the premier paid homage to Cambodian late King Norodom Sihanouk by laying a wreath at his memorial.

She also stood there in solemn silence for some time as a mark of deep respect to the late King. The premier was given a static guard of honour by the Cambodian armed forces.

Accompanied by Sheikh Rehana, the premier went round different sections of the museum and witnessed the evidence of the atrocities committed during Khmer Rouge regime.

A business delegation of Federation of Bangladesh Chambers of Commerce and Industry (FBCCI) led by its president Shafiul Islam (Mohiuddin) is on the premier’s entourage.

During the visit, the business team will attend a ‘business dialogue’ to be held with the business leaders of Cambodia.

Cambodia Chamber of Commerce will organise the dialogue with a view to expanding existing trade and investment between the two countries.
Prime Minister Sheikh Hasina will join the talks as the chief guest.

Besides, the FBCCI will sign an ‘Agreement of Cooperation’ with Cambodia Chamber of Commerce on December 4.