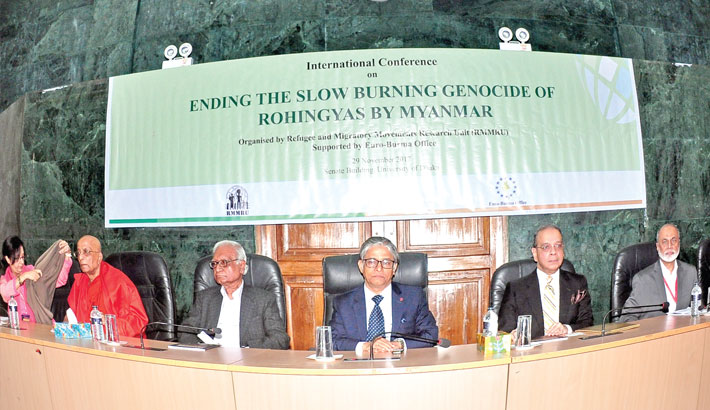 Migration experts and civil society members, both from home and abroad, at a conference on Wednesday said the international community should play the key role in ensuring the safe return of Rohingyas to their homeland with dignity as equal citizens.

They also said that the Rohingyas who took shelter in Bangladesh are not only refugees, but also the worst survivors of genocide, rape and brutal persecution.

The experts also accused Myanmar of committing genocide against Rohingyas and demanded trial of the perpetrators at the International Court of Justice.

Academicians, researchers and human right activists from different countries, including host Bangladesh, the USA, Australia, Germany Malaysia, India and Nepal are participating in the conference.

On the occasion, Cosmos Foundation organised a daylong photo exhibition styled ‘Art against Genocide’ at the conference venue depicting the conditions of the Rohingyas living in Cox’s Bazar camps. Thirty photographs were displayed at the event, drawing a huge attention of the experts and audience.

Over 622,000 Rohingyas have crossed the border and took refuge in Cox’s Bazar since 25 August to avoid persecution by Myanmar military in Rakhine.

Dhaka University Vice Chancellor Prof Akhtaruzzaman together with a number of noted personalities visited the exhibition.

Speaking at the programme, Dr Malik Mujahid, Chair Emeritus, Parliament of the World Religions and Co-Chair One America Coalition, said the Rohingya people deserve praise for remaining calm, collected and peaceful in the face of genocide.

“Rohingyas chose peace despite the fact that there are at least five active armed Christians and Buddhist groups fighting with guns against the Myanmar government for their rights. I think that Rohingyas deserve a Nobel Peace price for their peaceful struggle for liberty and justice despite genocide,” he said.

Malik regretted that Pope Francis has disappointed those who respect him as he played by the rules of Myanmar by not naming Rohingyas during his visit to the country.

“We can’t play by the rules of the genociders. We must defy them. It’s a genocide period, and genocide is never a bilateral issue. It must be stopped and the Rohingyas must go back to their country as equal citizens, not slaves,” Malik added.

Professor Emeritus Serajul Islam Choudhury stressed the rehabilitation process of the Rohingyas, ensuring their security and dignity through the effective initiative by the international community, including China, Russia and India putting aside their capitalist behaviour.

He questioned the need for systematically eliminating the Rohingyas from Myanmar though they had not revolted against the Myanmar government. This is a pre-meditated persecution, he said.

“The capitalist agenda has forced many countries to remain silent on the matter. The Rohingya problem is not a local or bilateral problem. It’s surely an international one,” he added.

He also expressed his surprise at the silence of Aung San Suu Kyi, who was once tormented by the same oppressors at one point.

The perpetrators of genocide against Rohingyas should be tried in the International Court of Justice, Choudhury demanded.

“It’s perhaps the first case of genocide that has been most comprehensively documented by the fleeing survivors. Hitler had denied Jews of German their citizenship rights, but acknowledged them as Jews. But the Rohingyas have been deprived of even that dignity and denied of their self-dignity,” he said.

CR Abrar, a professor of International Relations department at Dhaka University, said international agencies can play a big role in resolving the Rohingya problem as it is an international issue.

The DU professor thanked Cosmos Foundation for arranging the photo exhibition for better understanding of the issue.

In a speech given over Skype from New York, eminent philosopher Gayatri Spivak recollected how her interactions with the Rohingya in Teknaf in 1983-84 gave her a deep understanding about their ordeals. “The Rohingyas are currently stateless but we must work to change it.”

Dr Justice Syed Refaat Ahmed, a Supreme Court Judge, said the international community has to take effective steps for resolving the Rohingya crisis and ensuring the rights of Rohingyas. “If the state is unwilling to protect its citizens, then the scenario will shift on the wider community of states,” he said.