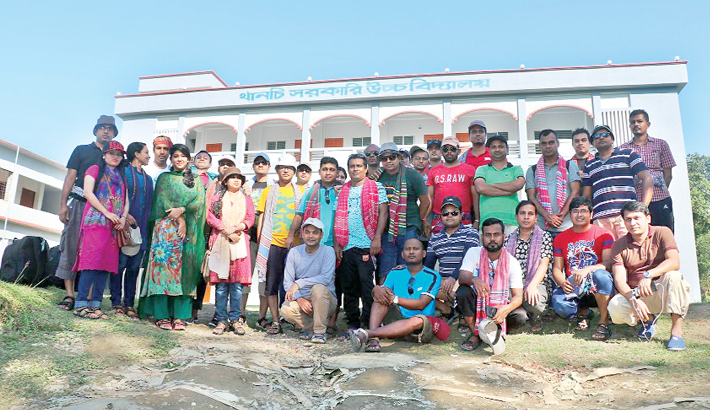 “She has a world of ready wealth,
Our minds and hearts to bless—

Spontaneous wisdom breathed by health,
Truth breathed by cheerfulness.
One impulse from a vernal wood
May teach you more of man,
Of moral evil and of good,
Than all the sages can.”
—-William Wordsworth

Notwithstanding being a student of English literature, my frontier to know nature was up to reading the poetry of prominent poets like William Wordsworth, a noted romantic poet. Except for going through the rhythm of striking poetry on nature, I could hardly manage very few moments to come nearer to nature in order to listen to the sorcerous tune of nature and consequently, it was really difficult to mingle my soul with the eternity of dear nature whom William Wordsworth adorably calls the mother, the teacher:

“Come forth into the light of things,
Let nature be your teacher.”

Perhaps, the extreme fear and anxiety of my father regarding my safety and my inclination towards seclusion, during my student life, had alienated me from the blessings of nature.

However, the phrase ‘better late than never’ exerted its full effect on me. My encounter with Amal dada and his travel group ‘Bhoboghurey Shastra’ revived my dormant yearning to be in association with nature. Forlornly, owing to my personal, professional and other constraints, I often miss many tours arranged by ‘Bhoboghurey Shastra’. But whenever I can outstrip my limit, I, without any thought, persevere to accompany the group.

Last September, Amal dada, the chief administer of the group, made an announcement that the 162th tour of ‘Bhoboghurey Shastra’ would be in ‘Remakri-Nafakhum waterfall’ of Bandarban district and posted a detailed itinerary in the facebook group. Although many years ago I had been to some tourist spots of Bandarban and Remakri and Nafakhum waterfall were not visited then. Recently, when I read the features on these two spots in newspapers and social media, an indomitable quest to go there bubbled up in my mind. Hence, as soon as the announcement came, I became so aflame that I did not hesitate to okay my presence in the tour by maintaining the core rules and requirement of the group.

On November 2 at 11 pm, the long-awaited tour kicked off with a rented bus from Arambaag. It can be mentioned here that till date, it was the biggest trip size of the group consisting of thirty seven people including a six-year baby, Asmita, the youngest one. Believe it or not, thanks to the unbound excitement and mirth revolving round the tour, those of us coming from outside of Dhaka to join the tour forgot the sluggishness of around eight-hour long journey to reach Dhaka. Rather it would not be an exaggeration that an aroma of the tour filled in the bus making us awake all the night long. 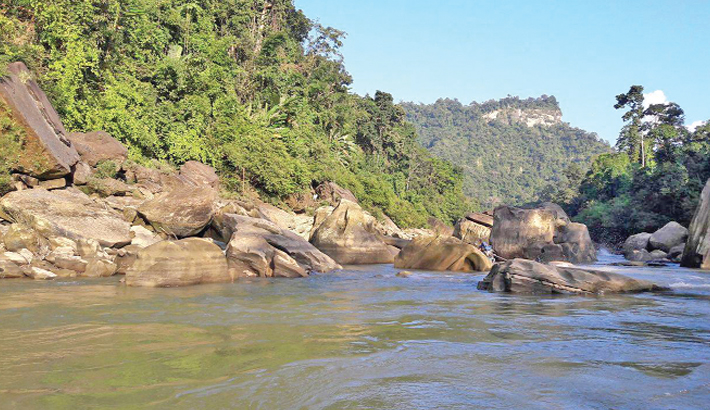 We arrived in Bandarban in the early morning. After refreshing ourselves and having breakfast, we headed for Thanchi by hiring a mini bus. The bus was running along the zigzag hilly roads which were like a roller coaster. During the journey, we took a short break and took the taste of some mountainous fruits. The roller coaster like ride took three hours to Thanchi. There we registered at police station with necessary information and documents. Later we hired a tour guide namely Prokash for Remakri. He accompanied us for three days at Remakri and Nafakhum. It should be mentioned here that for the first day, the tour guide charges BDT 700/- and BDT 600/- for the following days.

It was midday and the scorching heat of the sun exerted its full power over us and in order to save ourselves, we, as suggested by our group admin, put on caps and towels before commencing our journey. Although once paddle boats would ply on the Sangu River, the engine-run boats now are used for communication between Thanchi and Remakri, thanks to the arrival of numerous tourists. Six engine-run boats were rented to take us to Remakri. The journey was really challenging as we had to traverse the reverse streams, sudden tides and countless number of rocks and stones scattered around the river. Sometimes the depth of the river was so low that the stones below the water were seen and obstructed our way. But we dared the challenges and enjoyed the eye-soothing and marvelous scenery of both sides of the Sangu River. The nature here is unbeatable and beautiful. Rocky hills on either side of the river stand stiff in such manners that they are guarding the river! Some mountains are so tall that its turf looks as if it were covered with clouds. Shortly before reaching Remakri, there is a small waterfall, known as Remakrikhum where we stopped, got down, bathed and snapped the place as well as ourselves. Although the journey to Remakri via waterway seemed somehow chancy, this adventurous journey will surely be a wonderfully memorable experience for many of us.

When we reached Remarki, the sun was about to sink in the west and darkness began to besiege the place. It can be added that Remakri is a union under Thanchi Upazilla but surprisingly, still there is no electricity and mobile phone network in Thanchi. Therefore, prior to our tour, we were suggested to bring power bank to charge our mobile phones and other electronic gadgets. 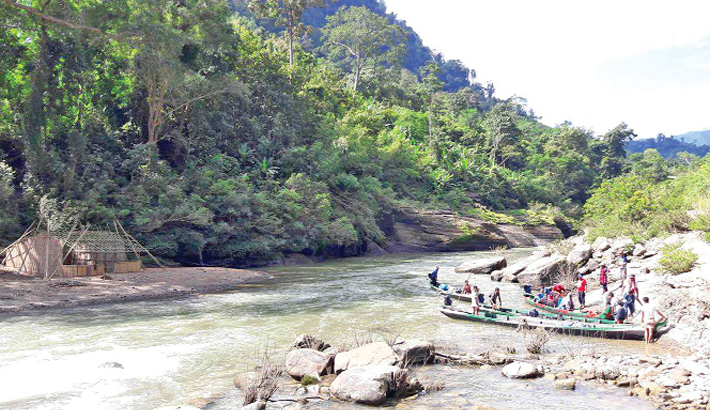 We were accommodated in a local hotel near the Remakri Bazar. The building of the hotel was actually made of woods and we rented four rooms hitherto where we shared our belongings with one another. Although we were tired following a long weary journey, the schedule to enjoy the full-moon was not changed. According to the schedule, the Bar-B-Q party began after our dinner programme.  While the Bar-B-Q party was in progress, a spate of adda, chorus songs continued.

In the following morning, after breakfast we started our journey to Nafakhum waterfall. Here, as per rules, we had to take a new guide to travel to Nafakhum waterfall along with our previous guide Prokash. As there is no other vehicle from Ramakri to Nafakhum waterfall, we trekked on foot, each taking a bottle full of oral saline, biscuits, dates, raisins. We were moving on the narrow, slippy roads along the Sangu River. Since the way was not an easy mode for walking and we needed to step very carefully. However, despite the menaces on the way, we did not stop observing the impenetrable and bewildering beauty around. As it was approximately a three-hour long journey, we took some breaks and series of adda and taking snaps ensued. Finally we crisscrossing a number of canals, zigzag and stony ways and channels reached the Nafakhum waterfall.

As soon as we arrived at our cherished destination we, forgetting all the hardships and tiredness during the journey to reach, exclaimed with ecstasy: “Got it, we got it finally”. The sound of waterfall was breaking the silence of the woods but its symphony was so mesmeric that we felt like being lost here for good! However, at the sight of the waterfall and its alluring beauty, all of us became so childlike as if we got our childhood back! We did not delay to be in the freezing water of Nafakhum waterfall, bathed, snapped, breathed pure air and despite continuous warning by Amal dada, some dared to jump! Actually, the enticement of the waterfall is so strong that one hardly can resist one’s impulse to dive or swim.

While looking at and around the waterfall, we could easily comprehend why people from different corners of the country come here again and again like our group administrator Amal dada and some other members of the group. Nafakhum waterfall also known as “Bengal’s Niagara” is more of a cascade. It is among the largest waterfalls in Bangladesh by volume of water falling. The sylvan beauty around this amazing waterfall situated in silent and solitude area is enough to draw anyone who loves nature, wants to explore its paramount beauty and of course, desires to be lost in its eternity.

As it is said always, our sweetest moments evaporate in the twinkling of eyes, leaving room for gloom. Amidst the unbound joy and thrill, came the bitter moment when we were to bid bye to Nafakhum water. It was bitter in the sense that nobody wants to leave the Paradise of natural beauty. We felt to stop the clock. Like in “The Lotus-Eaters” by Alfred Lord Tennyson, we felt to utter:

“Time driveth onward fast,
And in a little while our lips are dumb.
Let us alone.”

But again we cannot defy the rules of life. In fact, we cannot yield to the charm of any object and must carry on our duties on earth. Therefore, while returning from the ‘Paradise of beauty’ Nafakhum waterfall, I murmured the final stanza of Robert Frost’s famous poem “Stopping by Woods on a Snowy Evening”:

The writer is a BCS (General Education) Cadre Officer and teaches English at Ishwardi Government College, Pabna. He can be reached: [email protected]