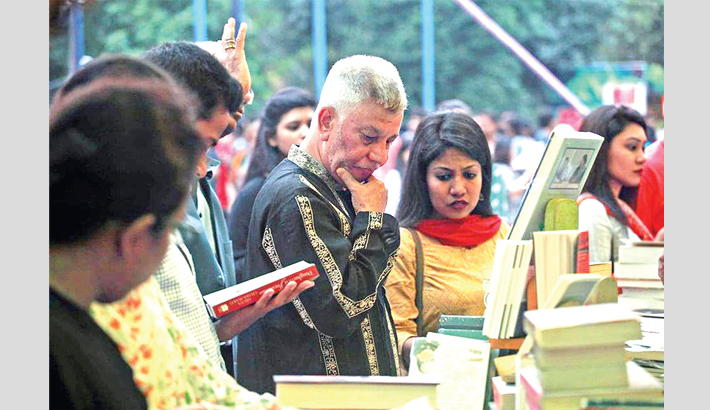 The spontaneous and vibrant gathering at Dhaka Lit Fest (DLF) has created a new horizon for Bangla literature on the world stage as many local and international writers, poets and researchers appreciated the richness and elegance of Bangla literature.

With the participation of internationally acclaimed writers, poets and scholars, the vibrant appearances of the book lovers of all ages made Dhaka Lit Fest a platform for exchanging and sharing creative practices and knowledge.


The three-day literary event, where people with different languages and cultures gathered with a common goal to foster literature practices, virtually turned into a platform for sharing and exchanging diversified literatures and cultures breaking the boundary of literary landscape, authors and book lovers viewed.

Imdadul Haque Milon, a noted novelist, said Dhaka Lit Fest is a wonderful event for both local writers of different genres of literatures as it creates opportunity to know literatures of different languages. As Bangladesh has rich literature and culture, the event will highlight those before the world, he added.

Anisul Hoque, an eminent writer, said, “Bangladeshi literature is really outstanding. Though Bangla literature is very rich, it did not get proper attention due to inadequate translation of literary works.”

Bringing together poets, writers and artists from different countries, the Dhaka Lit Fest provides an opportunity for them to learn about our country and literature, he said, adding, “Similarly, we also have the opportunity to learn about the literatures of many other nations.”

Sadaf Saaz, one of the directors of DLF, said, “When we started the festival, we had ambitious dreams. Despite having a rich tradition of literature stretching back well over a thousand years, Bangladeshi writings remained largely unknown throughout the world.”

“Contemporary writers, apart from a few, were also cut off from the global literary landscape. We wanted the festival to feature the best of our literature and culture, past and present and to a platform take our stories way beyond our borders,” she added.


“It has really given us immense inspiration to promote and showcase Bangladeshi literature, culture and heritage at the global stage,” Kazi Anis Ahmed, one of the directors of Dhaka Lit Fest said.

“This year’s festival is the seventh edition of “Dhaka Lit Fest”. Previously, it was held with the name of Hay Festival. Our main objective was to project our literature, culture and tradition at the international level through this literary festival” he added.

“Like every year, the programmes celebrated diversity, pluralism, other language, culture, whilst highlighting our own, which is our way of saying “No to walls,” Walls of all kinds,” they added.

Farah Kabir, country director of Action-Aid Bangladesh, said Dhaka Lit Fest has been highly successful in providing an international platform for Bangladesh and in inspiring new writers. It is stimulating interest in world literature and English Language writing and helping in bringing in the creativity and talents of Bangladeshi writers to the world stage.

Many visitors described this literary festival as an excellent platform for both literature-loving people, authors and other stakeholders, which eventually will diversify literature practices.

While talking to the news agency, a visitor said “I visited previously held all Hay Festival (former name of the festival). I hope this international literary event will enrich our Bangla literature and culture as it appears as a wonderful gathering of writers, poets, publishers with different
language and cultures.”     —BSS