When we talk about the contributions of a scholar, we find that a few aspects of his/her creations often remain untouched. We mainly focus on the major inputs and thus miss the features which are less highlighted but significant. For example, when it comes to a multi-talented creative genius like Humayun Ahmed, critics mainly emphasize on his novels, short stories, television dramas and films. But very few of them notice about the legacy of music that Humayun Ahmed has left behind. He not only listened to music, but also revived and promoted the excellent works of country’s less discussed folk bards and simultaneously created his own marks as a lyricist. A creative person who deals with drama and film has always a chance to use class music. And as an ardent music lover Humayun did it quite successfully. His perfect choice of music, especially from the realm of Bangla folk music, and their use in a casual style complimented the hidden philosophical and spiritual message that he intended to provide to the viewers by his works. Throughout his career as a drama director and in his different ventures as a film director, he created some wonderful lyrics which ultimately gave birth to a number of great songs. Albeit Humayun was initially a bit hesitant about writing the lyric, but he steadily came out from that shy feeling using his avid understanding of music as a quality listener and long experience of working with country’s reputed lyricists, composers and music directors. And the rest is history. His signature songs, including the numbers which were written by others, still remind us of him and his passionate love for music. Humayun Ahmed was born on November 13, 1948 in Netrokona’s Mohonganj. Ahead of his 69th birth anniversary morning tea pays tribute to this great cultural icon by discussing his success as a lyricist and music enthusiast.

Love for music is something that Humayun Ahmed inherited from his father Foyzur Rahman Ahmed. Though his father bought a violin but he couldn’t play it. Being a police officer he was a real patron of literature and music. Humayun stated in his childhood memoir Amar Chelebela that, often musical evenings were arranged in their Sylhet’s Mirabazar house where a local singer named Pranesh Das performed regularly. In fact, Humayun Ahmed wanted to learn music and requested his father to keep a music teacher for him. His father managed a music teacher but that teacher said that his voice was not appropriate for music and advised him to learn tabla. Though he couldn’t learn music but in the later years Humayun’s fascination about music increased gradually. Right from the beginning as an author he used his favourite part of lyrics of numerous songs, particularly Tagore’s songs, as the title of his novels and excerpted them in many of his novels. But until he devoted himself to writing television drama, he couldn’t use music effectively.


Initially as a playwright Humayun used music only as title track in his popular single-episode dramas like ‘Prothom Prohor’, ‘Khela’, ‘Ekdin Hothath’ and ‘Onno Bhubon’. Even when he came with his first drama serial ‘Eishob Din Ratri’, the work achieved huge appreciation but he didn’t make any experiment with music in it. He began another venture ‘Bohubrihi’ where he used music artistically. Tagore’s song ‘Jibon jokhon shukaye jay’ in the leap of Lutfun Nahar Lota created a new dimension in the drama. Viewers can still remember that how Afzal Hossain played a Rabindra sangeet ‘Amaro poran jaha chay’ in the cassette player for pacifying the tantrum of his wife Dipa Islam. It was Humayun’s drama series ‘Ayomoy’ where he first wrote lyrics for songs. If the keen viewers of the dramas of BTV’s golden age take a trip down to the memory lane, they can recall the songs used in ‘Ayomoy’. Songs like ‘Aula chule nachore’, ‘Rohmot chachar barite’, ‘Asmane uithache chadni’, ‘Tomar kache ekta jinish chai’, ‘Uthlo konya badhlo chul’, ‘Duniya bole chomotkar’ and ‘Asman bhainga josna pore’ not only suited with the situation of the storyline but also indicated to the potentials of Humayun Ahmed as a lyricist. Even when he used songs of foreign language, his viewers applauded it. Think about the most popular Bangla drama serial ‘Kothau Keu Nei’, where a Hindi song ‘Hawame udta jaye’, favourite song of its protagonist Baker Bhai, obtained overwhelming acceptance. Humayun presented the famous song by Ukil Munshi ‘Tui Jodi amar hoitire’ and many numbers by Hason Raja including ‘Baula ke banailo re’ in his drama series ‘Aj Robibar’. Among his numerous praiseworthy single episode dramas and drama series ‘Nokkhotrer Rat’, ‘Khadok’, ‘Shobuj Shathi’, ‘Ei Megh Ei Roudro’, ‘Ochin Ragini’, ‘Josnar Phul’, ‘Package Shongbad’, ‘Shomudrobilash Private Limited’, ‘Ochin Brikkho’, ‘Nitu Tomake Bhalobashi’, ‘Shobai Geche Bone’, ‘Ure Jay Bok Pokkhi’, ‘Badol Diner Prothom Kodom Phul’, ‘Hablonger Bazar’, ‘Jomunar Jol Dekhte Kalo’, ‘Tara Tinjon Fuchka Bilash’, ‘Rupar Ghonta’ and ‘Vejabo Chokh Shomudro Jole’ are mentionable where he either wrote lyrics or used the songs of our folk legends brilliantly. 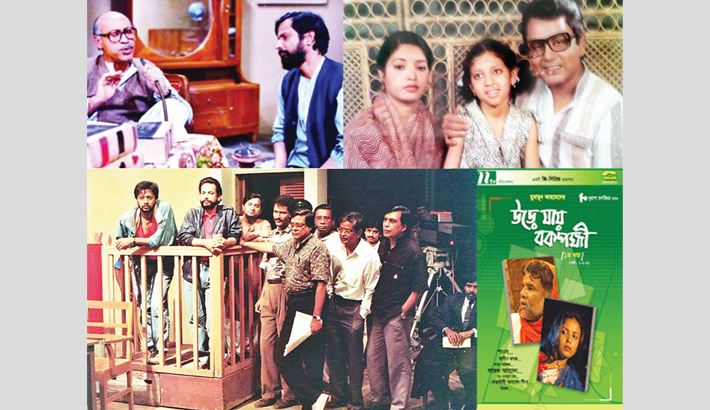 Though primarily Humayun Ahmed was little tentative about writing songs for movies but his mastery on music exposed gradually through the films he directed. He wrote two songs for his first movie ‘Aguner Poroshmoni’, but finally used only one of them in the title. Humayun utilized Tagore’s song ‘Chader hashi badh bhengeche’ and Hason Raja’s song ‘Nesha lagilo re’ in the film. Later he mentioned in his memoir Chobi Bananor Golpo that why he didn’t use his songs in the main storyline. According to him he didn’t have the mental strength to add his name in the list of lyricists with Rabindranath Tagore and Hason Raja. ‘Srabon Megher Din’, the second film directed by Humayun Ahmed, is considered as one of the best Bangla movies where music has been applied most successfully. The narrative based on a village singer Moti is full of rich folk musical scores. 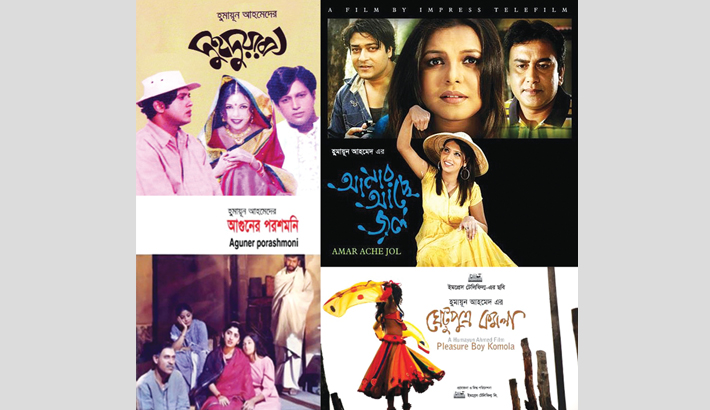 Certainly the viewers and listeners of Bangladesh will never forget the lyrics Humayun Ahmed penned for an advertisement to promote primary education where Abdul Kuddus Boyati roams around in a village street with some kids singing a song ‘Ei din din noy aro din ache/ Ei dinere niba tumra shei dinero kache’. That single song made a huge breakthrough and inspired hundreds of thousands of guardians to send their children in the primary school. Impact of Humaun Ahmed’s music can be measured by this incident. His biggest success as a music aficionado was his great understanding of music. He was a true facilitator for artistes and other musical minds. Using his immense popularity he promoted quality music and shaped the taste of the viewers and listeners of Bangladesh. And as a lyricist one has to consider Humayun’s variety of subject matter and genres. He had the exceptional quality to meet the demands of his script and that is why whether it comes to folk songs, folk fusions or modern songs, Humayun was at his best while creating songs. Besides, his great talent as an author always helped him to choose excellent poetic words for his lyrics. He hardly wrote fifty songs, but made a clear difference with his creations. As long as people will engage themselves in love affairs and think about the spiritualism in Bangladesh, they will continue listening to the songs written by Humayun Ahmed.