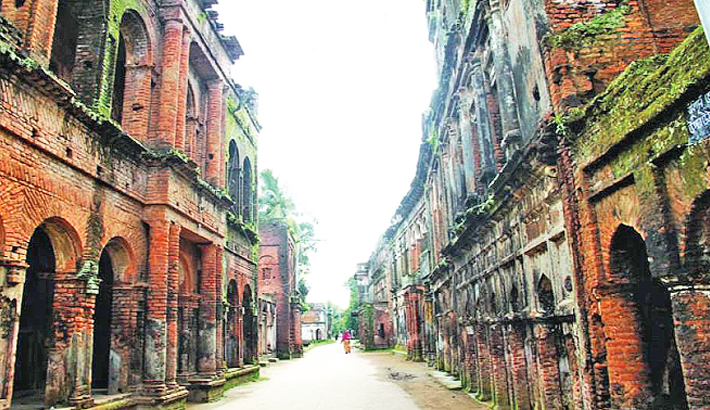 The regal signs are still present in the bricks of the ancient walls and the terracotta works on the black stones! A busy city of once upon a time, is now only a part of history. There is no crowd, no noise. It is like a city which has been lost for hundred of years. It is the Panam Nagar which is also known as ‘The Lost City’; it still bears witness to Sonargaon’s glorious history that was known as the capital of Bengal. The city is almost in ruins. In 2006, World Monument Fund declared Panam Nagar as one of the 100 ruinous historical establishments.

Nearly 450 years ago, in the 15th century, the Baro Bhuiyan leader Isa Khan established the first capital of Bengal in Sonargaon. Twenty square kilometre area of Sonargaon consisted of the city at that time. The Bengal Muslin was the best business commodity then. Mainly the city was built for the high ranked royal employees and the Muslin businessmen. The royal punishment and service of Sonargaon were directed from the Panam Nagar. Some have called this the port city because foreign cloth was imported through Meghna River (East) and Shitolokkha River (West) and Muslin was exported via waterway. Entering Panam Nagar, the first thing that comes to one’s sight are the buildings. Some are two-storied, some are one. Some 52 of the buildings that still stand in the Panam Nagar are mentionable. There are 31 buildings in the north side of Panam Street and 21 in the south of it.

Each building has a different style. The uniqueness can be seen in the fine architecture. Along with Mughal and Greek architecture, the colour and design of the buildings display techniques by the local artists. Some places show works of colonial times. Iron brackets had been used in almost all the houses. The floors of the houses have red, white, black mosaic work. Iron grill on the windows and ventilators had been used. The cast iron work that had been done in the houses can be compared to those works done with cast iron in Europe. The houses are situated at a certain distance apart from each other in this skilfully planned city. A well was in each house for safe water. There were five ponds in the city and two ponds by the sides of the city; also there was water drainage system in the city.

To communicate with Sonargaon, bridges named Panam Pool, Dulalpur Pool and many more bridges were made, but they are all lost with time.

Along with the residential buildings, there are mosque, temple, church, abbey, bathroom, dance-room, hotel, gallery, treasury, court room, audience chamber, tunnels, and old museum. There is a 400 year old abbey-house, west to which there is “Neelkuthi” made by the East-India Company. Like Isa Khan’s son Musa Khan’s Promod Bhaban, here is Fateh Shah’s shrine, shrine of the twelve awliyas (saints), Hazrat Shah Ibrahim Danish Monda and shrineof his descendants’, Damdam fort, Sonakanda fort, Shrine of the five pirs (saints), garrets etc. and many other archaeological sites.

Half kilometre away from Panam Nagar, at Sonargaon, lies the Folk Art and Crafts Foundation Museum of Artist Zainul Abedin. There is a sculpture at the entrance. A man is pushing a cart. The entrance is decorated with beautiful craft and design. There is a tank in front of the museum’s building. On three sides, there are paved ghats. On the remaining side, there are two sculptures of soldiers mounted on horses on both sides. There are in total 11 galleries for visitors in the museum (Sonargaon Museum). In every gallery, mark of rare tradition is preserved.

Near Mograpara point of Narayanganj district, 2.5 kilometres north to Dhaka-Chittagong Highway, three ancient cities of Boro Nagar, Khash Nagar and Panam Nagar are situated among which Panam Nagar is the most attractive. The ruins in the walls of the hundreds of year old glorious city bear the signs of negligence. The ruins bear the sign of negligence in the walls of the hundreds of year’s old glorious city but it is still standing and is an attractive site for the tourists. ‘Lost City’ Panam can be an ideal escape from the noisy city.