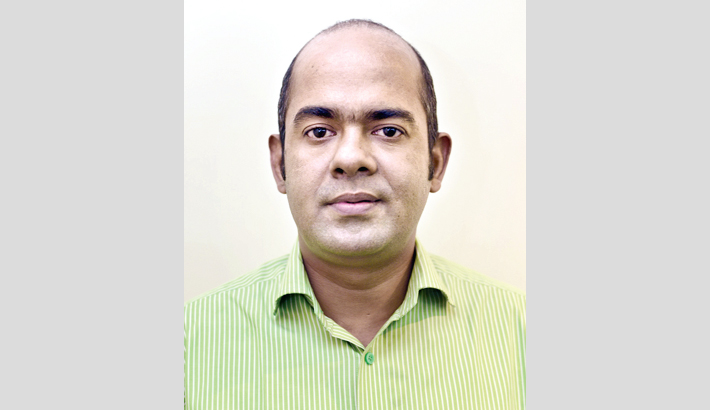 Gone are the days when students had to travel across the country for collecting university entrance admission forms, spending a handsome amount of buck of a poor family. Now, with the initiation of web based technology in the admission system, candidates from any part of the country are being able to fill up their forms, to know about their exam schedule and results sitting at home with a few strokes on mobile phone with little or no cost. In a country where most of the people are illiterate or half-literate, spreading information technology there is no less than like selling mirror in the city of the blind. Thus coming to today’s position has never been that easy; it had to overcome a labyrinth of crooked paths.

Let me recall an incident here, Bangladesh had a golden opportunity to join the first submarine cable for free back in 1991. But it could not seize the tremendous scope in a flimsy excuse of sensitive information draining out from the country. Thanks to the ineptitude and inept decision of the then policy makers, for which Bangladesh set back in comparison with neighbouring countries more than a decade. It was only when the then incumbent government – the present ruling party led government revived the issue and redoubled its effort for connecting the country to the information super highway in 2006 with spending some Tk 1200 crore to pave the way for boosting up the ICT sector and subsequently for digitisation of the country.

Obviously, it was the prudent and well-timed step of the government which began to help flourish the ICT sector of the country. It gave an impetus to proliferating various ICT industry including ICT start-up, call centre business, software firms, Internet service providers etc. in private sectors in one hand, and stimulate the government to initiate various project for reaching the benefit of ICT to the doorstep of general people on the other.

Allow me recount some chronological events that have occurred over the past years in the ICT sector of the country.

In 2011, indigenous branded Laptop- Doyel and Bijoy were marketed in the governmental effort. Samsung setup its research and development centre with recruiting more than 6 hundred engineers from various universities of the country. The government, in collaboration with IBM, announced to provide 20,500 Laptops and Projectors in the educational institutions across the country. Prime Minister Sheikh Hasina was conferred South-South award for her unique contribution to reducing child death and maternal matrimony utilising benefits of ICT. In the same year Bangladesh acquired the membership of Unicode Institutional Consortium.

To plug corruption, extortion, and irregularities in the government purchase system, the government launched Electronic Government Procurements (EGP) system in 2012.  In addition, to check forgery and verify authentication of signature on passport, ID card, financial or land related documents, digital signature service was introduced in that year. Ebook of primary and secondary levels and 3G wireless network began its journey in the same year.

Unicode based Bangla font was inaugurated by prime minister in 2013 under A2I program. The first and complete Bangla search engine - Pipilika was formally launched in the year. Local software industry started to see considerable export earnings in 2013. It was the first time that the earning had gone beyond $10 crore. In 2014, National Portal (NP) was undertaken. Developed in Bangla, the site consists of 25 thousand web portals accommodating more than 20 lakh contents. Furthermore, for the development of ICT and expanding education, prime minister of Bangladesh again won South-South co-operation visionary award.

In 2016, multimedia contents of 17 books of class one to five were developed under the project of Interactive Digital Multimedia Content. Out of 63,601 primary schools, the government set up multimedia class rooms in 1,500 schools and Laptops were provided to 5,000 schools in the same year. The ICT division is also introducing mobile training labs to train some 50,000 women to make them part of an efficient workforce. The authority also has envisaged setting up more than 500 business process outsourcing centres soon.

Jessore Hi-Tek Park has opened, Mohakhali and Rajshahi Hi-Tek parks are under construction and are expected to complete soon. 4G internet is also on the cards. ICT Division also plans some social services including info lady: e-service at doorstep, national helpline: unique know all services and e-shop: reducing the middleman services. It also is going to take a project for digitisation of judiciary to reduce hassles and backlog of cases. The government has mulled over utilising the benefits of cloud base technology in primary schools and a project in this regard is likely to begin soon. Moreover, it has planned to establish broadband Internet connection at all unions by next year.

It would be unfair on my part if I do not specifically mention the contribution of the man who has voluntarily and relentlessly been working as the main architect of touching the dream of digital Bangladesh, is prime minister’s ICT advisor Mr Sajeeb Wajed Joy. In fact, it is Mr Sajeeb who is in the background for planning, advising, instructing and implementing all innovative ICT projects meticulously in order to gallop towards achieving the ultimate goal of Digital Bangladesh. Under his supervision, the government unveiled a 4-year roadmap of ICT plan which involved 70% internet penetration by 2019 and that of cent per cent by 2021. The government has also contemplated to help the industry earn $1 billion in software export and outsourcing by 2018, and take the figure to $5 billion by 2021, by 2021, the ICT sector is expected to contribute more than 5 per cent to the country’s gross domestic product.

From the above steps and activities, one can undoubtedly say the government is on the right track in its efforts to work towards “Digital Bangladesh”. The government’s endeavours are simply praiseworthy and appreciable although it would have been more palatable if the issue could be addressed in a more basic nature at a time. This is because ideally the IT industry should develop itself without government’s direct assistance. It would automatically develop itself once a country’s primary and secondary economic sectors are fully developed. Be that as it may, it is laudable that the government is giving a solid footing in the first place for the industry to be flourished intuitively and that the Digital Bangladesh is not far-fetched; rather, it is coming into reality and is now on the horizon.