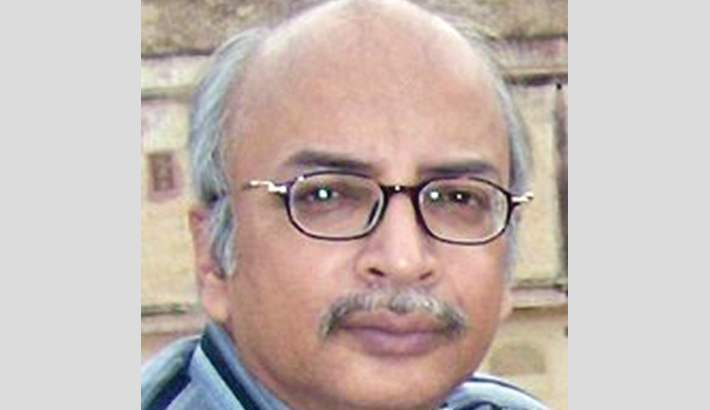 Electricity demand is rapidly increasing in Bangladesh due to economic activities and industrial development that is maintaining a stable GDP growth. The average yearly growth of electricity demand in last six years has been 11.2%. To meet this high demand the power supply in terms of net generation has increased by 57% from 2009-10 to 2014-15. The share of population with access to electricity also increased from 55.2% in 2010 to 74.0% in 2015 including solar. Currently it stands at about 80%. The generation capacity along with actual generation increased substantially in the last five years with the installation of rental power plants. The current (July 2017) installed capacity is 13,596MW with the highest generation record of 9,471MW in a day (May 27, 2017). In 2008, the highest generation record was 4036 MW. Compared to pre-2009 period, that is a substantial increase. Energy generation has also doubled.

Despite such success in past several years, people are suffering from serious load shedding this year, especially in rural area. Crumbling Transmission and Distribution (T&D) system is adding to the troubles of many failing and overstretched power plants resulting in the creaks in the entire system. At the same time, large affordable base load plants, mainly coal fired, have failed to materialise principally due to lack of coal importing infrastructure. Planning mismatch of such large import based generation with fuel import facilities development has forced the government to run the emergency measure of adding more oil based power plants (3000 MW more has been declared recently) increasing its installed capacity share to 36-38%. So far, primary energy infrastructure in terms of coal import and LNG terminal has been the principal failures in realising government planning for power sector. Only Payra coal fired power plant of 1,320 MW seems to make some progress and may produce its first electron in 2020. The rest 11,000 MW seen in the planning has hardly moved except some progress in Rampal. The challenge for the future remains to supply reliable, sustainable and affordable primary energy. A decision in favour of developing local coal would have eased the situation considerably. A review of PSMP 2010 shows that along with gas even local coal production was short than its yearly target of 1 million ton. The greatest success in the past years that will perhaps pass the sustainability and reliability test is the securing of 600 MW power import from India.
The other primary energy option for the government is imported Regasified-LNG. With a large gas based infrastructure, Bangladesh perhaps has no other choice but eventually depend on large volume of imported R-LNG for many of its energy needs. The government has also failed in securing any R-LNG import so far. It promised in 2010 that by 2012 the country will be getting 500 MMcfd R-LNG which has been repeatedly shifted to the current date of 2018-19. These delays have put the power sector in an uncertainty in both steady supply assurance and reasonable/predictable pricing – absolute prerequisites for industrial growth. As a result, business expansion has been tentative and mostly through efficiency improvement in the last few years.

Another challenge for the government has been to enable a robust system planning. According to the Government’s Power System Master Plan (PSMP 2010), electricity demand is expected to rise to 34,000MW by 2030. Actual demand consistently exceeds the capacity as well as what was actually served from that capacity. Due to routine shutdown, unexpected breakdown and fuel shortage Bangladesh could never produce to its full capacity since 1996. From 2008-09, the de-rated capacity gradually increased to a level that could meet the peak demand on paper but principally the gas shortage kept almost 1,500MW as stranded capacity. Currently 4000 MW power cannot be produced due to the reasons mentioned above.While the 2020 peak demand by PSMP 2010 is predicted as 17,300MW, the 2016 plan puts it at 13,000MW and yet government is focused on producing 23,000MW. The historical implementation success of BPDB has been 50% of its planned projects. Even at that rate there is a big risk of creating over capacity and the government must be cautious in its planning.Many projects and fuel choice are popping up without any planning. The rationale behind dual fuel project is not understood. When currently about 1,700MW capacity is stranded due to gas shortage, adding 2500 MW gas/diesel dual fuel option in the planning is mind boggling (Figure 1). Even LNG import will not resolve the problem and will increase dependency on highly expensive diesel. The political mileage of adding capacity and bending to different interest groups will create an unsustainable system.

The MDG mandates that by 2030, reliable, sustainable, affordable and modern energy should be available to all citizens. Bangladesh being a participant in the MDG mandate it must try meeting the target objectives. Despite the massive drop in world oil prices, the Bangladesh Government did not reduce prices of domestic oil until recently. In April 2016, the Government reduced the furnace oil and diesel price by Taka 18 and Taka 3 per litre respectively.Under 2014 prices, i.e. Tk. 68/l high speed diesel (HSD) price and Tk. 62/l heavy fuel (HFO) price, the cost of diesel and furnace oil power production in 2015 was very high at Tk 26/KWh and Tk15/kWh respectively. The heavily subsidized domestic gas ($1/MMcf) produces electricity at only Tk 2.57/kWh. The current furnace oil based production cost by private importer of furnace oil, who don’t even pay the tax, is about Tk 8/kWh. Currently the average power production cost is aboutTk. 6.0/kWh Even then BPDB is losing thousands of crores taka each year. Selling the entire HFO and HSD at the current international price to the power producers will reduce the loss substantially. 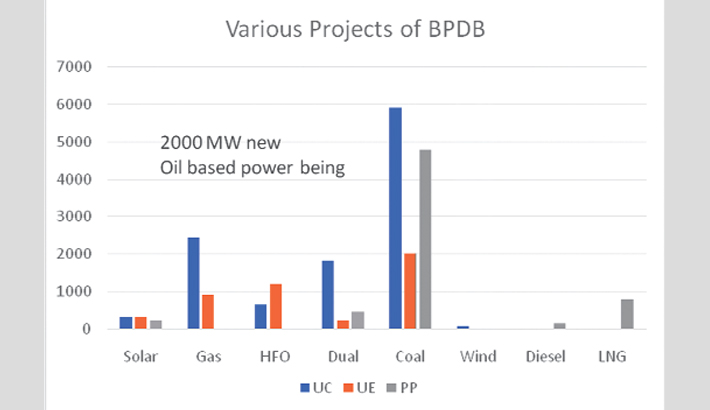 The following table shows power tariff prediction by PSMP2016 under its plan which is higher than 2010 plan due to revised fuel mix (discarding power production from local coal). Apart from higher production cost it will also create more than 90% import dependency of fuel for electricity in 2041.

The existing gas shortage is estimated at 700 MMcfd. Almost non-existent exploration activity since 2000 resulted in adding only 0.75 tcf of new discovery (0.5 tcf from IOC owned Bangura field). The yearly usage rate has reached nearly 1 tcf now. Present activity for both onshore and offshore exploration is going at snail’s pace principally due to policy dilemma. The BAPEX only policy of last ten years has completely failed.

Despite even IOC exploration being the cheaper option government has created a situation when we don’t have any other choice but to import R-LNG. Current weighted average gas price is about 2.2 $/Mcf. If we bring 500 MMcfd R-LNG at $8/Mcf and mix it with local supply of 2700 MMcfd, the resultant price will be $3.4/Mcf. The gas deficit in 2025 is predicted to be 2400 MMcfd and local supply will be 24000 MMcfd. In this case for a $10 imported R-LNG, the average gas price will be $6.1/Mcf. A gas blend of 4000 MMcfd import and 1200MMcfd local supply in 2030 will result in $8.2/Mcf gas. These calculations are indicative. Gas price, tax VAT etc. can have adverse effect on the price.The current LNG price can probably be adjusted in the domestic gas market with reasonable tariff adjustment but any rapid increase in LNG price and increasing shortage will pose a great challenge in gas pricing which has been historically much lower in Bangladesh than international or regional gas price.

Fortunately, multiple agencies including the World Bank and IMF predict stable fossil fuel price together with coal for the next five years. Figure 2 show the oil and LNG price prediction for next five years. They have been proven wrong many times in the past but the government have at least two more or three years of low oil price window where they can materialise at least two large base load power plants. The historic low price of fossil fuel also gives the government the opportunity to tag the local energy price to international price with a transparent formula. The next five-year fuel price prediction also ensures that the government will not have to make any major upward price adjustment soon. They may not get this opportunity again in a long time. This will definitely ease the burden of energy subsidy in Bangladesh.

Apart from affordable and reliable primary energy, the other challenge is financing. The rapid growth of power supply has been in oil based generation although 62% of installed capacity is still gas based. Since the beginning of gas shortage in 2007, almost 30% of the current generation has grown into oil base that poses a huge financial and economic risk in case of an oil price hike. Government is aware of this risk and trying to expedite imported coal based large scale base-load power plants without much success. The published plan for investment meeting the predicted demand runs into billions of dollars ($13 billion for 2400 MW nuclear, $2 billion for Rampal, $ 4.4 billion for Matarbari, $ 10 billion for other coal fired power projects). These do not include transmission and distribution cost.  Conservatively at least $15 billion would be required to evacuate all the electricity to the load centres in the next 10 years. Many of the projects have plans to add thousands of additional capacity in the same hub creating a nightmarish challenge for system balancing. A modern automated and independent LDC is must for managing the expanding system. If all the projects those are talked about or even for which MOU have been signed, the total generation from large base load plants adds up to almost 15000 MW already. If the difference between summer peak and winter peak (Figure 3) is considered (currently 2,500 MW and growing rapidly), excess capacity will pose a major financial crunch for the power sector. 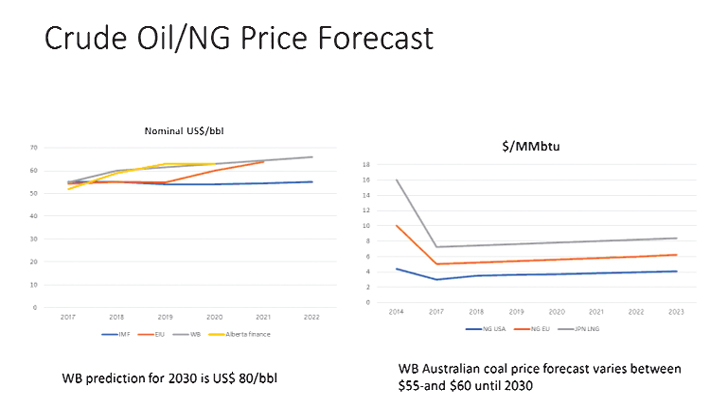 Figure 2 Oil and LNG Price Prediction for next five years

A regional power network will give the opportunity to balance the system better. It is not unusual to plan a large overcapacity in a conventional plan, especially in a perpetual shortage situation. Many countries and regions (provinces) have gone through shortage and surplus generation capacity but for a resource scarce country like Bangladesh it could be damaging. Bangladesh should definitely adhere to the principles of Integrated Resource Planning. 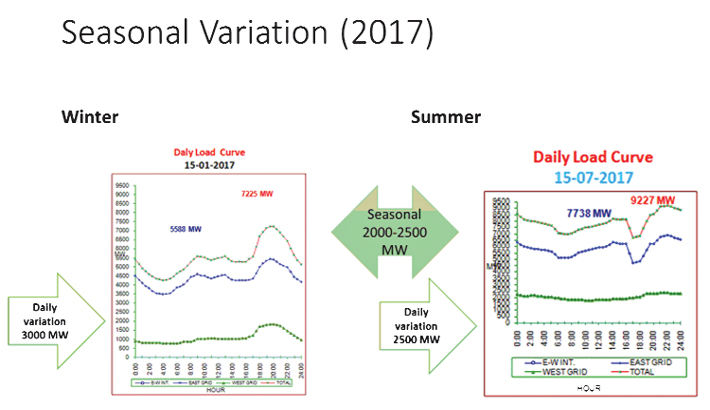 In the zest of adding power, the government should not get carried away by approving mega projects one after another. A solid homework based on painstaking micro analysis for a bottom up demand forecast along with giving serious consideration to the much cheaper demand side EE&C initiatives, the government can save huge resources, ease price escalation of power tariff and avoid embarrassment. Looking at different plans and rapid change in direction, shows lack of coordination and professionalism. The strong desire for political benefit and interference of the non-professionals at every level may create a system that can be compared to the planning of Dhaka city – incurable.

The writer is a Professor, PMRE dept., BUET, Dhaka, Bangladesh