Another war of a freedom fighter 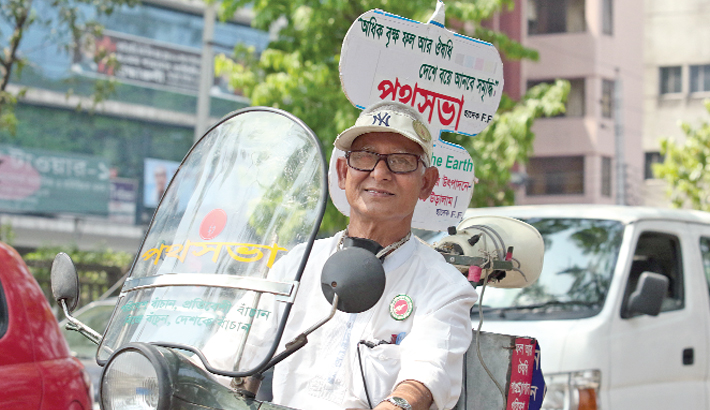 Riding a vespa, a freedom fighter is urging people with a hand mike to plant more fruit and herbal trees. This is a familiar scenario to many pedestrians on the streets in capital. As Sadekur Rahman has been planting trees and encouraging people to do so for the last 12 years, many city people now know him and appreciate his efforts. Setting up a hand mike at the back of his scooter, Sadekur installs the mouthpiece perfectly and thus he faces no problem in continuing his campaign, even while driving. Sometimes he parks his scooter beside a street or a park and then plays Bangabandhu’s historic 7th March speech and environment-friendly songs in mike, gives motivational speech, and distributes handbills among people so that they are encouraged to make our country green.

This correspondent met Sadekur Rahman in front of the Shaheed Suhrawardy Medical College and Hospital when he was distributing handbills.

Asked, why he requests everyone to plant fruit and herbal trees instead of flower trees, Sadekur replied, “There are many people in our country who, out of their hobby, plant flower trees in their gardens. It’s good to plant flower trees to beautify our surroundings, but I think planting fruit trees is essential as 46 years after the independence, Bangladesh is yet to become self-sufficient in food. Fruit trees can meet the nutritional needs of our citizens. If we want to be a prosperous nation, we have to make a healthy generation. Besides, I have seen that the number of herbal trees is declining gradually in our country. Different parts of these trees are used to prepare medicines. That is why, I ask all to plant more fruit and herbal trees.”

Sadekur Rahman has planted more than 7000 trees so far, including 3000 in the capital. He nurtures these trees in Dhaka and Narsingdi (his home district). Some years ago when many trees, that he planted on the Manik Mia Avenue and in Bijoy Sarani area, were cut down. The  authorities concerned even didn’t think of informing him. That incident seriously hurt Sadekur, but it couldn’t deviate him from the path of achieving his goal.

When asked, what has inspired him to motivate people to plant trees? Sadekur said, “I am leading a bonus life. During the country’s Liberation War in 1971 I could have lost my life like many of my fellow fighters. After the end of the war, I studied and did different types of private jobs. Now at this stage of my life, I have nothing to gain. I joined the Liberation War to free our motherland, so that the next generation can grow up and live in an independent country. Today I am asking everyone to plant trees and this initiative is also aimed at facilitating the new generation. One day we will die, but the trees will protect the environment.”

At the time of our glorious War of Liberation in 1971 Sadekur Rahman was only 15. While fleeing to India he was captured by the Pakistani army.

However, he was lucky enough to abscond. After crossing the border through Brahmanbaria’s Kasba area along with seven more youths, he went to take a 21-day training initially but he was denied the opportunity because of his young age. But his determination to fight for the country had impressed the trainers and they trained him and recruited him for Sector-3 under its commander ANM Nuruzzaman.

Recently, Sadekur Rahman has survived a critical fracture in his leg. Even, lying down on the bed in his Mirpur’s Paikpara rented house, he used to think about the condition of his planted trees. At the end of conversation he informed this correspondent that he will have to go to Ramna to take care of the trees he planted there.