Seminar ‘An Ode to Neruda’, poetic drama staged at NDUB 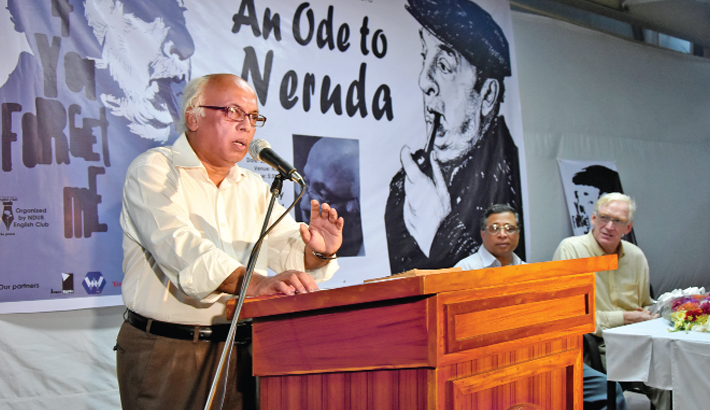 A seminar in memory of the literature Nobel laureate on his death anniversary, entitled ‘An Ode to Neruda’, was organised by the English Club of Notre Dame University Bangladesh (NDUB) at 5:30pm on Saturday, 23rd September, 2017.

Through this event, the NDUBEC welcomed and congratulated Father Patrick, the new Vice Chancellor of NDUB, for his successful ascension.

Registrar and Chairman of the English Department Father Adam delivered a motivational speech encouraging the students to take part in such co-curricular academic activities.

Hosts of the event Ashley Shoptorshi Samaddar, Vice President of NDUBEC, and Iftekhar Ahmad, member of NDUBEC, introduced Neruda to the students in brief. Only at the age of 19, this Chilean poet Neruda was a household name in Latin America.

Chief guest and speaker of the event Syed Badrul Ahsan talked elaborately on Neruda’s political and poetic life. He shares, “There are reasons to remember Neruda. In him, factors were combined that constitute modern man. He wrote profound verses. He was a cultured man at home, linked with traditions that make up the mosaic of life”.

Syed Badrul Ahsan also recited some of the verses from Neruda’s poems, for instance, “I want to do with you what spring does with the cherry trees,” to give an example how strong and effective Neruda’s imageries and metaphors are.


After his lecture, NDUBEC members staged plays on Neruda’s poems, for the first time in Bangladesh, directed by the co-moderator of English Club and Lecturer of English Department — Ahmed Tahsin Shams.

The lights flicked off and the first ever performance on poems by Neruda began at the premise of NDUB at 6:30pm.

The performers glimmering in the spot light mesmerized everyone being passionate, which was full to the brim with chemistry and melancholy, at the same time.

Neruda’s poetic narrative was deconstructed and contextualized in the performances. One of the famous poems by Neruda named ‘If You Forget Me’, performed by Jarin Tasnim and Issack Halder, students of CSE and BBA department respectively, was staged in a way as if two characters were in converse beside a lakeshore on a moonlit night, where the woman went beyond the archetype feminine notions, yet romantic.

The next performance named ‘Tonight I Can Write the Saddest Lines’, performed by Shahrear Amin Rafi, Arnab Pial and Md Saifuddin Al Quaderi, presented the universal melancholy in love through three different characters sharing their tales through trio-logue.

The plays were directed by Lecture of the Department of English Language and Literature Ahmed Tahsin Shams. It was cinematographed by Alex Romario and Rayhan Robin, stage lighting was assisted by Shimanto Barua, background sound was assisted by Sanjoy Kumar Barman and Rasel Ahmed, audio recording of the performances was done by Lal Tewari, members of NDUBEC.

Registrar Fr Adam concluded the event with certificate giving ceremony to the participants and organizers of the seminar.