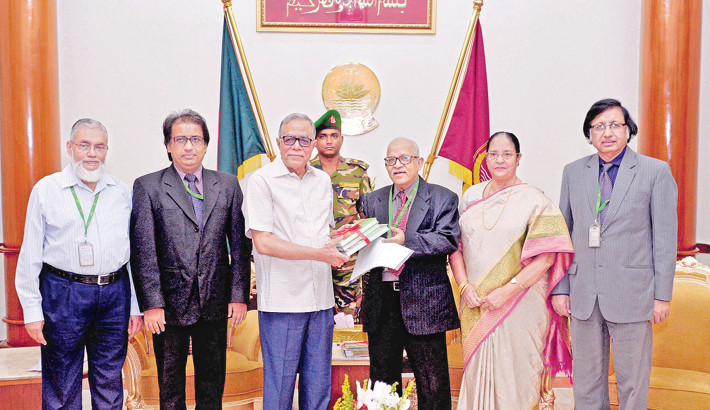 A delegation of Asiatic Society of Bangladesh meets President Abdul Hamid at Bangabhaban in the capital on Sunday.-PID PHOTO

President Abdul Hamid on Sunday urged the Asiatic Society of Bangladesh to take initiatives to present the real history of the country’s Liberation War, reports UNB.

He came up with call when a five-member delegation of the think tank, led by its President Prof Amirul Islam Chowdhury, met him at Bangabhaban in the afternoon.

Expressing satisfaction over the activities of the society, Hamid said as a think tank, it must work to project the country’s history and tradition at national and international levels.

He assured the delegation of providing all-out support in conducting activities of the society.

The delegation apprised the President of the overall activities of the Asiatic Society and its future plans, including encyclopedia of the War of Liberation, the national atlas of Bangladesh, and digitised data and e-publication.

It sought cooperation from the President in running the Asiatic Society.

Secretaries concerned to the President were present during the meeting.