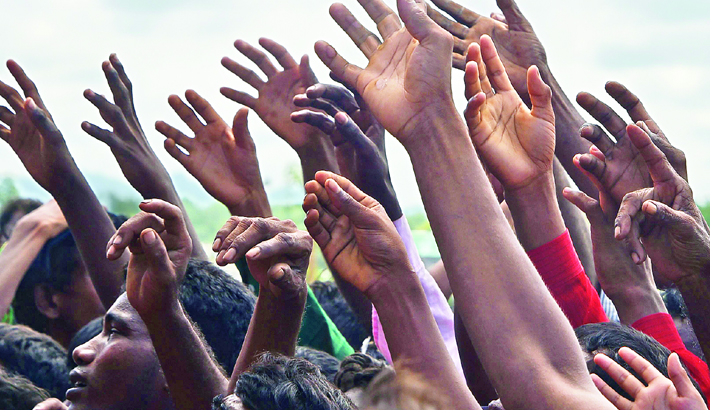 Rohingya refugees reach up for relief supplies at the Kutupalong refugee camp on Sunday. — AFP Photo

“I was struck by the incredible magnitude of their needs. They need everything — they need food, they need clean water, they need shelter, they need proper health care,” he told reporters.

Grandi said there had been an “incredible outpouring of local generosity” but that now needed to be “beefed up by massive international assistance, financial and material”.

“That’s partly why I am here, to help... the government organise that response,” said Grandi, the chief of the Office of UN High Commissioner for Refugees.The UN said Sunday that 436,000 Rohingya, a stateless Muslim minority, had arrived from Myanmar’s Rakhine state since an outbreak of violence there a month ago.

Grandi said the influx had slowed in recent days but it was impossible to tell whether more would come.

He also said his office was providing “technical assistance” to help Bangladesh register the Rohingya, whom Myanmar considers to be illegal immigrants.

Bangladesh only recognises a tiny fraction of around 700,000 Rohingya living in camps near the border with Myanmar as refugees, referring to the rest as undocumented Myanmar nationals.


It has “no plan for the time being” to grant refugee status to the newly-arrived Rohingya, senior Bangladesh minister Amir Hossain Amu said on Sunday.

“We want Rohingya to return to their own land,” said Amu, who chairs a cabinet committee on national security.

Bangladesh has begun providing the new arrivals with identity cards and recording their biometric data, a process that began last week
and is expected to take several months to complete.

Many hope that will allow them eventually to return to Myanmar. Civilian leader Aung San Suu Kyi said last week that those who had been verified as refugees from her country would be allowed back.

Grandi said he hoped the UN’s role would give the registration “the necessary credibility, which is so urgent not just for repatriation but for assistance”.

At the moment, UN agencies say it is difficult to ensure aid is distributed evenly because refugees are undocumented and are still moving from one place to another.

Grandi said the scale of the influx — which he called the “fastest and most urgent refugee emergency in the world” — had made it difficult to assess needs quickly.

But he added: “I think that the response is getting more organised.”