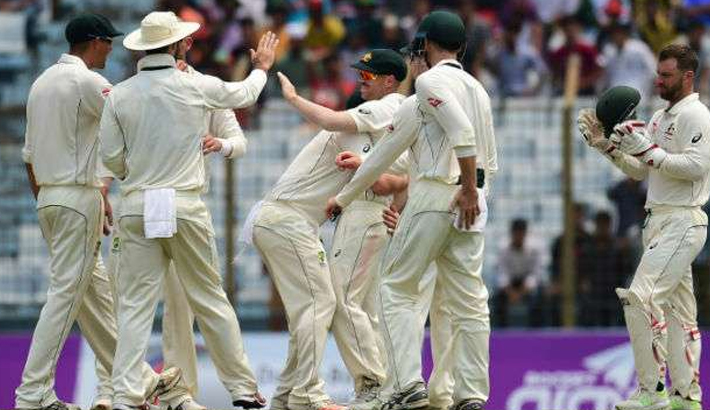 Bangladesh have drawn the two-match Test series against Australia by 1-1 as the visitors won the second Test by seven wickets at Zahur Ahmed Chowdhury Stadium in Chittagong on Thursday.

The end of the match marked the conclusion of a series which will be in the collective memory of cricket enthusiasts for many years to come.

Bangladesh though being the underdogs, positioned themselves in a sweet spot after winning the first Test which allowed them the opportunity to clinch the series against the mighty Australians. For the Australians it was a series where they had to taste the humble pie more than once.

Aussie off-spinner Nathan Lyon was declared the man of the match for his decisive 13 for 154, which is also his best in Tests. Lyon was joined by David Warner in the ‘Men of the Series’ award.

But the last day of this epic contest was quite an anti-climax, Australia started the day with a lead of 72 runs. Bangladesh sent off Australian tail back to the pavilion before they could add any run to the scoreboard.

Tamim Iqbal (12) and Soumya Sarkar (9) opened for Bangladesh with an air of indecisiveness, Pat Cummins was duly rewarded as he bagged Soumya’s wicket in an excellent show of extraction of bounce from dead wickets.

Tamim continued with the offensive frame of mind and looked to hoist Lyon over cover but misjudged the sharp spin and bounce and was stumped by Matthew Wade.

Soon after, Imrul Kayes (15) was confounded by a Lyon delivery that turned, bounced and also held in the pitch,resulting in a forced stroke that spooned gently to Glenn Maxwell at cover. Bangladesh premier all-rounder Shakib Al Hasan (2) was unable to cover Lyon’s overspin and bounce and the ball went straight into the hands of a helmeted David Warner at second slip.


At the other end Nasir Hossain (5) seemed intent on driving anything Steve O’Keefe tossed up. O’Keefe then darted a straighter delivery which also jumped and flew off an edge high on the bat to Smith at slip.

O’Keefe had clearly not forgotten Hossain’s mimic of Nigel Llong’s raised finger to dismiss Cummins the night before, offering the “shhh” gesture to the vanquished batsman.

Bangladesh were 43 for five and still 29 runs in deficit at that point. But Mushfiqur (31) and Sabbir (24) were able to staunch some of the bleeding, Tiger duo continued to live dangerously, as a series of reverse-sweep attempts failed to make contact.

Mushfiqur sensible innings gave Bangladesh a glimmer of a defendable lead, but Aussie speedstar Cummins brought another sharply bouncing delivery and a thin edge through to Wade.

While Mehedi Hasan Miraz scored 14 off 54 and endured bravely, Mominul Haque (29) top edged a sweep at Lyon which was taken by Cummins.

The innings did not last long after tea, as Lyon slid a quicker ball through the defences of Taijul Islam, his 13th wicket of the match, before a similar offering from O’Keefe defeated the last man Mustafizur. Bangladesh left a target of 86 runs for Australia to chase in the second innings to level the series.

Australians wasted little time in their second innings, though wickets fell at a rate that suggested a target of around 150 would have been extremely challenging. David Warner (8) was bounced out by Mustafizur, before Steve Smith (16) and Matt Renshaw (22) edged the spinning ball behind.

However Handscomb (16) and Maxwell (25) sealed the deal for Australia as the pair effectively used their feet and picked gaps. Maxwell ended it with a mighty six and celebrated posthumously, hinting Bangladesh have come of age to become an worthy opponent.