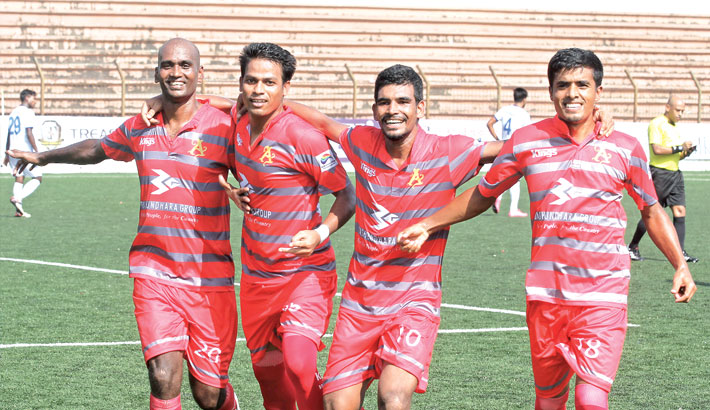 Bashundhara Kings finished with a 2-2 draw against Uttar Baridhara Sporting Club in their maiden outing in the first round match of Bangladesh Championship League on Monday.

The match started 10 minutes late than the schedule due to logistical hurdles at 2:10 pm in scorching heat of the noon at Bir Shrestha Shaheed Sepoy Mohammad Mostafa Kamal Stadium in the city’s Kamalapur.

Sponsored by Marcel, the second division professional football league of Bangladesh kicked off on August 6.

Though Bashundhara Kings dominated over the course of the match, Uttar Baridhara also put on a fierce contest with their boots in yesterday’s match.

Bashundhara Kings got off to a scintillating start with quick fire attack in the eleventh minute on Baridhara’s D-box.

Kings youngstar Rakibul Islam, who is also part of Dhaka District Under-18 squad, broke through the defence of Baridhara but missed the target and Baridhara goalie Osman watched the ball flying over the bar.

Bashundhara Kings marked their maiden goal in the professional league on 44th minute as forward Ripon Biswas scored a thundering goal. He sprinted past Baridhara defenders and capped off the effort with an in-swinger that fooled Baridhara goalie Osman to earn Kings their first goal of the match and the only one of the first half.

Second half of the match started off with the continuation of the domination of Bashundhara Kings as they doubled their lead on the 53rd minute as Asaduzzaman crashed in from the left wing all the while trapping the ball. He easily passed the ball to teammate Ripon Biswas, who toe poked the ball to the net.

On 25th minute of the second half, Bashundhara defender Faruk Parvez’s tackle was considered a foul and Uttar Baridhara was awarded a penalty kick. Baridhara midfielder Dalim cashed on the opportunity and scored Baridhara’ first goal of the match.

Baridhara found their momentum and started undertaking fast moving and attacking action. They started creating opportunities. Mounting pressure on Bashundhara finally told as Baridhara forward Sujon took on a double bluff as he went for a dummy run and tucked away the ball past Kings goalie Md Selim.

Bashundhara King’s coach SM Asifuzzaman played out a strategy of attacking play and tactical defence in the first half of the match. With a match of mostly 4-4-2 formation, he maintained the traditional format of playmaking.

The match was held amid speculation of low spectator turnout but despite being a fairly young club Bashundhara Kings amassed a fairly sizable amount of supporters as they made their presence felt during the match.