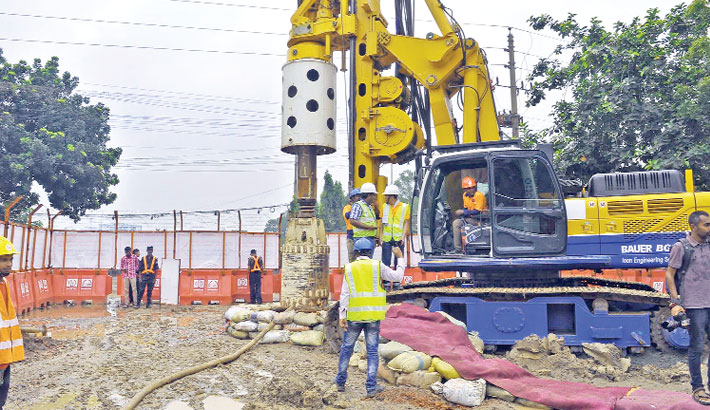 Construction work of the much-hyped 12-km metro rail from Uttara to Agargaon and its nine stations begins in the capital on Wednesday. The photo was taken at Agargaon point. - sun Photo

Work on the much-hyped 12-km metro rail from Uttara to Agargaon and its nine stations began on Wednesday, reports UNB.

Road Transport and Bridges Minister Obaidul Quader inaugurated the work of packages-3 and 4 at Agargaon point in the afternoon.

The first-phase work from Uttara to Agargaon will be completed within 2019 while the second-phase one from Agargaon to Motijheel within 2020.

Japan International Cooperation Agency (JICA) will provide Tk 16,600 crore as soft loan of the total estimated approximate cost of Tk 22,000 crore, while the Bangladesh government will bear the rest, the minister said.

The project will be completed in eight packages. Of them, the 12-km elevated expressway and nine stations would be under two packages, he said.

The metro rail will stop in every four minutes at 16 stations from Uttara to Motijheel via Mirpur and Farmgate and it will have
the capacity to carry 60,000 passengers every hour.

Earlier on May 4 last, three agreements were signed with Italian-Thai Development Company and Sinohydro Corporation in this regard.

The ambitious project is expected to provide an improved, safe, faster and affordable but modern means of urban public transport service significantly reducing the perennial traffic congestion in the capital.