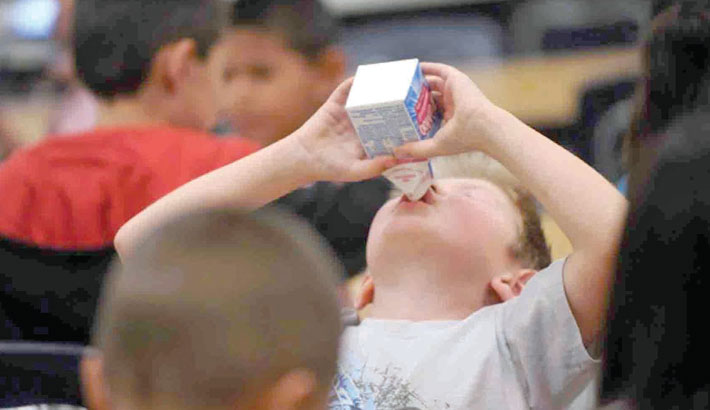 Children who drink dairy alternatives like soy, almond or rice milks are slightly shorter than their peers who drink cow’s milk, according to a new study. A study found that each daily cup of non-cow’s milk consumed was associated with 0.4 centimeters (0.15 inches) lower height than average for a child’s age.

The study was a cross-section involving 5,034 healthy Canadian children ranging in age from 2 to 6 years old. The subjects were on average 38 months of age, with 51% being male, and were recruited from nine family and paediatric health-care practices from December 2008 to September 2015.

Of those participating, about 5% drank exclusively non-cow’s milks, and about 84% drank only cow’s milk; about 8% drank both and about 3% drank neither. The findings are sure to add fire to the ongoing debate about the benefits of cow’s milk versus dairy alternatives.

Amy Joy Lanou, a professor of health and wellness at the University of North Carolina-Asheville who was not involved in the research, said she had several issues with the study, most notably why only milk consumption was considered.

Lanou, whose research has led her to believe that cow’s milk is “not a necessary food,” said she believes the study makes an improper leap by implying that taller means healthier.

Connie Weaver, a professor of nutrition science at Purdue University who was also not involved in the study, said she found it interesting. “This is the first study that I recall directly comparing cow milk with plant-based beverages for a physiological benefit,” she wrote in an email. “We know that some of the plant beverages, almond especially, have lower protein contents so I have speculated that calcium absorption may be lower. This would suggest that cow’s milk is superior.”

However, she says, “A wrong message would be if people who do not consume cow’s milk would decide to avoid the plant-based milks also.” The study suggests that one reason for the difference in height might be that plant-based milks do not stimulate insulin-like growth factor, or IGF, production as well as cow’s milk does. Studies have found that adults with higher levels of certain IGFs have increased risks of reproductive cancers.

Overall, she would advise parents that “cow’s milk may be the best option, but plant-based beverages provide many needed nutrients like protein, calcium, magnesium, potassium,” which is far better than what most kids might prefer to drink.

Lanou would tell parents who are already giving plant-based milks to their children not to worry — but to make sure their kids are getting enough protein from other sources throughout the day.
—Courtesy: CNN