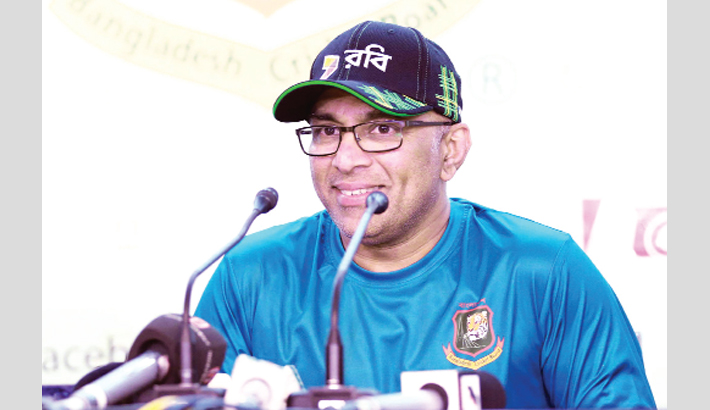 The forthcoming Test series against Australia is yet under the clouds due to the pay dispute between Cricket Australia and its players. But Bangladesh National Cricket Team head coach Chandika Hathurusingha expressed his optimism on Wednesday that tigers are capable to whitewash Australia at home turf.

The series comprises two Tests, scheduled to be played in Chittagong and Dhaka. Despite the team’s success in the limited over cricket in recent past, Tigers remain a work-in-progress in Test cricket.


Bangladesh are currently ninth on the International Cricket Council’s Test rankings but recently they squared Test series against England and Sri Lanka and that is why Hathurusingha believes his team will play for a victory in both Test matches not draw.

“I think we have made some progress in Test cricket. We have a game plan. We know how to win Test matches at least in subcontinent. We did that. So off course we want to win those two Test against Australia. I think we are competitive at our home,” Hathurusingha said at Sher-e-Bangla National Cricket Stadium in a press briefing.

On the contrary, Australia has been hugely impressive with their home and away performance in recent years with winning some tight series overseas and it has become a big deal for any teams to take them down. But Bangladesh’s head coach thinks the upcoming not Australia but South Africa series will be main challenge for his side.

“Our main challenge is to adjust to South African condition and wicket. We are not familiar to South Africa. This is really a big deal to bag win in South Africa for any Test playing nation. They deserved to hold the top position in Test ranking. This is going to be a challenging task for us,” Hathurusingha said.

BCB announced a 29-member preliminary squad for the upcoming Australia and South Africa series. Some cricketers among 29 members recently traveled in Australia for High Performance squad. They have already joined Tigers’ practice camp after returning home. Hathurusingha said that they called a huge number of cricketers in practice camp keeping 2019 World Cup in mind.

“Our plan is bigger and that’s why we have 29 cricketers in practice camp. Our main focus is ICC World Cup 2019, at least for me during my contract phase,” Hathurusingha said.


The 29-members will be heading to the port city Chittagong today for their training and conditioning camp for the upcoming Test series against Australia.

Tigers have been sweating it out in a conditioning camp since July 10 at their home of cricket—Sher-e-Bangla National Cricket Stadium in the capital.

After more than a decade Bangladesh will face Australia in Test. Tigers are taking it upon themselves to put up a show worthy of such occasion. They are looking forward to adapt to the wicket and conditions of the port city.