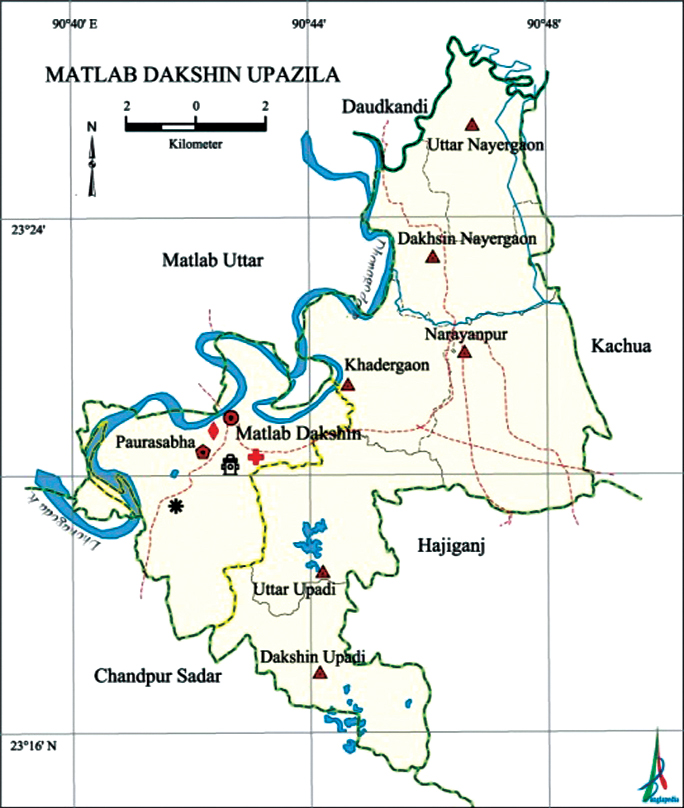 Matlab Dakshin Upazila (Chandpur district) area 131.69 sq km, located in between 23°15’ and 23°26’ north latitudes and in between 90°40’ and 90°50’ east longitudes. It is bounded by Matlab Uttar and Daudkandi upazilas of Comilla district on the north, Chandpur Sadar and Hajiganj upazilas on the south, Kachua upazila (Chandpur district) on the east and Matlab Uttar on the west.

Cottage industries Goldsmith, blacksmith, potteries, etc. Hats, bazars and fairs Hats and bazars are 18, most noted of which are Narayanpur Hat, Nayergaon Hat, Munshir Hat, Matlabganj Bazar, Master Bazar and Arong Bazar. Main exports Potato, jute, fish. Access to electricity All the wards and unions of the upazila are under rural electrification net-work. However 29.42% (urban 42.19% and rural 24.35%) of the dwelling households have access to electricity. Sources of drinking water Tube-well 91.47%, tap 0.81%, pond 3.19% and others 4.53%.     — Banglapedia