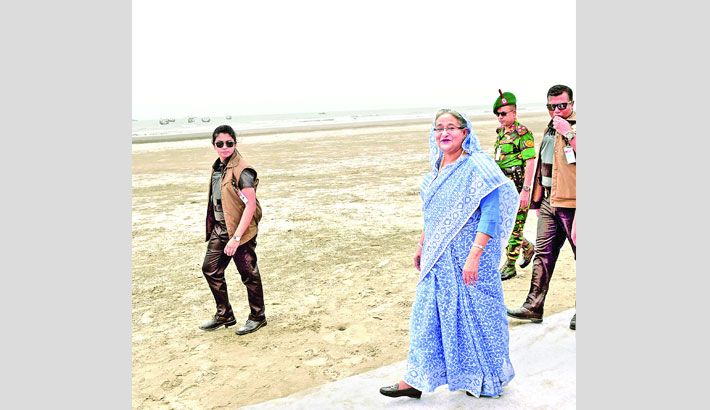 “People will have the opportunity to enjoy the beauty of the nature alongside improving their socioeconomic condition,” she said.

The Prime Minister said this after formally inaugurating the marine driveway from Cox’s Bazar to Teknaf. She inaugurated it unveiling the plaque at Inani point.

Bangladesh Army constructed the marine driveway under the supervision of Roads and Highways Department for protecting the Cox’s Bazar seashore and facilitating an easy viewing of the beauty of the Bay of Bengal.

Sheikh Hasina said new potentials of tourism have opened up here with the inauguration of the driveway.

She said the driveway will attract not only huge domestic tourists but also foreign ones and will help accelerate the socioeconomic development of the district.

Sheikh Hasina said Cox’s Bazar sea beach is the longest sandy sea beach of the world and people from home and abroad come here to enjoy the natural beauty. “The government has undertaken a number of projects to make Cox’s Bazar even more attractive.”

To make road journeys more comfortable for tourists, Hasina said, the government has decided to turn Chittagong-Cox’s Bazar Road into a four-lane one.

She said modernisation of Cox’s Bazar Airport will also be ensured. A wide-bodied Boeing 737-800 aircraft landed at the airport today as its runway has already been expanded. “Such a flight will come here from Dhaka once a week, at least.”

Talking about the existing communal harmony in the country, the Prime Minister said the people of all religions will live in the country enjoying the equal rights.

The country must be saved from militancy, terrorism and drug abuse, she said, adding, “I urge all to resist these menaces... we’ll never tolerate these things...we seek cooperation of all.”

Some photos went viral in various social media sites where the Prime Minister is seen wading through ankle-deep water in a jolly mood.

Awami League leaders and security officials were with Sheikh Hasina while she was enjoying natural beauty of Cox’s Bazar.