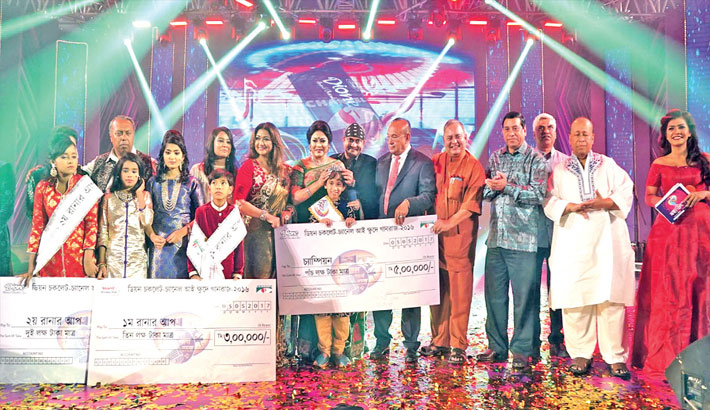 Putting all speculations to rest, Ankon, from Barisal crowned as the winner of the 6th season of ‘Dion Chocolate-Channel i Khude Gaanraj’, at a gala event held at Bangabandhu International Conference Centre (BICC) in the capital on Friday.

Oikkya from Thakurgaon’s announced the first runner-up and Chittagong’s Oishee was the second runner-up. They received cash prizes worth Tk 3 Lakh and 2 Lakh spectively.

All the winners will get study scholarships at Cambrian School and College as well as  health insurances. In addition to that, three winners will have CD/DVDs released from Impress Audio Vision and will participate in various Channel i programmes.

“Please pray for me, I want to go a long way with singing as my career”, Ankon, sought prayers from everybody after receiving winning prize.

The sixth installment of this musical reality show paid tributes to the late singer, composer Lucky Akhand on the grand finale night.

A total of seven contestants have been picked up as finalists in the sixth season. They are- Pranto, Ankon, Oikko, Oishee, Tilottoma, Othi and Ishika.

The event was held at the Hall of Fame of Basundhara International Convention Center in the city on Friday.

The winners were announced by Shykh Seraj, Director and Message Head of Channel i.

The three champions will perform Live on musical show ‘Gaan-er Utsab’ on Channel i. Directed by Anannya Ruma, the show will be hosted by Mousumi Barua.

Apart from singing, the talented artists will share their stories behind becoming child stars. The show will air on 7th May, Sunday at 2:40 PM on Channel i.