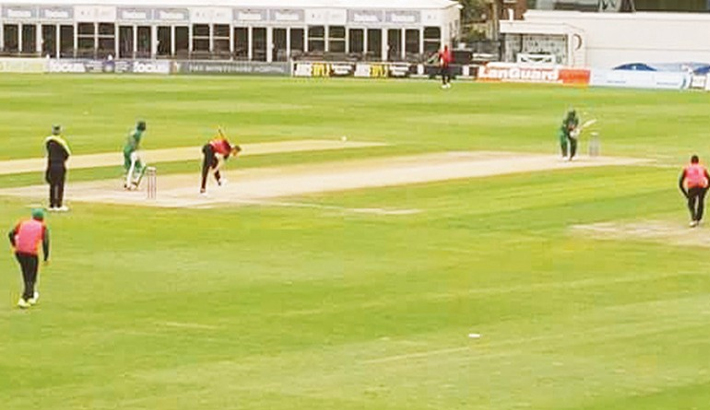 In the second practice match, Bangladesh team brutally hammered down Sussex Seconds XI to win the game by 134 runs at 1st Central County Ground in Hove, England on Friday.

Sussex Seconds won the toss and chose to bowl against the Tigers.

Batting first, Bangladesh put on a commanding total of 314 runs against Sussex in stipulated 50 overs.

Opener Imrul scored 92 off 78 balls including 12 fours and a single six.

Mehedi Hasan Miraz was the second highest run scorer for Bangladesh with 60 runs.

J Smith picked up 3 wickets for 53 for Sussex Seconds.


In reply, Sussex Seconds XI made a good start to their innings but their hope of victory shattered after they lose the wickets of Robson (49), Jenner (40) and Mahmudullah Riyad (32), who was playing for Sussex in the practice match.

After that, Sussex XI’s wickets started to fall at a regular interval and their innings was packed for 180 runs in 40.3 overs.

Subashis Roy and Taskin Ahmed took two wickets each for 28 and 30 runs respectively.

Earlier, Bangladesh played another friendly against Duke of Norfolk XI where Mushfiqur stayed with unbeaten 134 runs on the way to their collection of 345/ 7 in 50 overs at Arundel Castle Cricket Ground on May 1. However, the match was washed out due to rain.

The Tigers are now in England for a training camp ahead of their upcoming battles in the Ireland Tri-Nation Series and the ICC Championship Trophy.

After completing their camp in England, the Tigers will leave for Belfast on May 7 to play the Ireland Tri-Nation Series starting on May 12.

Completing their Ireland Tri-Nation Series mission, Bangladesh team will depart from Dublin on May 25 to England to take part in the eight editions of the eight-nation ICC Champions Trophy starting on June 1 at Kennington Oval, London.