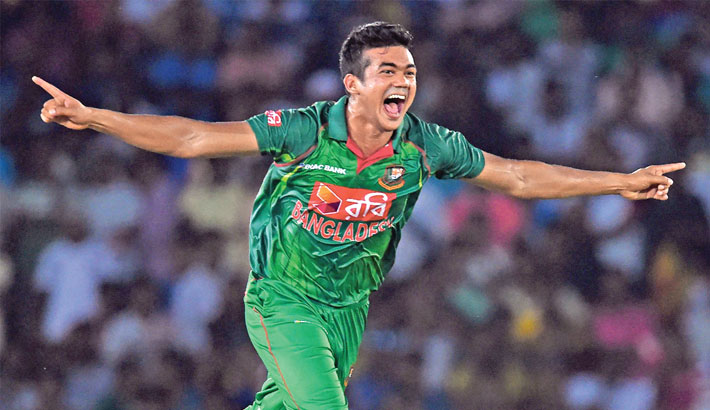 The second ODI of the three-match series between Bangladesh and Sri Lanka was abandoned due to heavy rain at Rangiri Dambulla International Stadium on Tuesday, reports UNB.

The rain started after the Lankan innings at around 7.40pm (Bangladesh time) and subsequently the match was called off at 8:45 pm, an hour and 15 minutes before the cut-off time as the match officials observed it would not be possible for the ground staffs to make outfield ready to resume the game.

The 3rd and last ODI of the will be held at Sinhalese Sports Club Ground in Colombo on April 1.

The Tigers already have a 1-0 lead in the series as they beat hosts by 90 runs in the first match on Saturday last.

Earlier, in the first innings of the match, pacer Taskin Ahmed claimed a hat-trick while Sri Lanka posted 311 runs against the Tigers.

Sri Lanka collected 311 for all in 49.5 overs with Kusal Mendis's maiden ODI century of 102 and skipper Upul Tharanga's half century of 65 runs.

Centurion Mendis was caught and bowled by young pace bowler Taskin Ahmed at 216/4 in 37.4 overs. He faced 107 balls for his maiden ODI ton that witnessed nine boundaries and one over boundary.

Asela Gunaratne fired 39 off 28 balls, including four fours and one six, while Milinda Siriwardana added run-a-ball 30. Dinesh Chandimal stayed for 24 runs for the side.

Batting first after winning the toss, Lankan faced the first jolt losing Danushka Gunathilaka (9) at 18/1 in 2.3 overs. Bangladesh captain Mashrafe Bin Mortaza did the job by his 3rd ball of the 2nd over dismissing Gunathilaka who was caught by keeper Mushfiqur Rahim.

Sri Lankan 2nd pair between skipper Upul Tharanga and Kusal Mendis cautiously faced the Tigers' bowling attack and recovered early damage playing for 111 runs in 22 overs to carry the team collection to 129/2 in 24.3 overs before Tharanga was run out after facing a no ball off Mustafizur Rahman. Tharanga faced 76 balls to hit nine boundaries.

Kusal Mendis continued his composure with Dinesh Chandimal in the 3rd wicket for another partnership of 83 in 12.1 overs that ended at 212/3 in 36.4 overs as Chandimal was trapped lbw by Mustafizur.

Mehedi Hasan Miraz bowled out Milinda Siriwardana at 271/5 in 45.4 overs.

Bangladesh captured the remaining five wickets within a span of 31 runs in 3.1 overs where Taskin Ahmed completed the hat-trick capturing three successive wickets.