Looking Back at March 25 Genocide 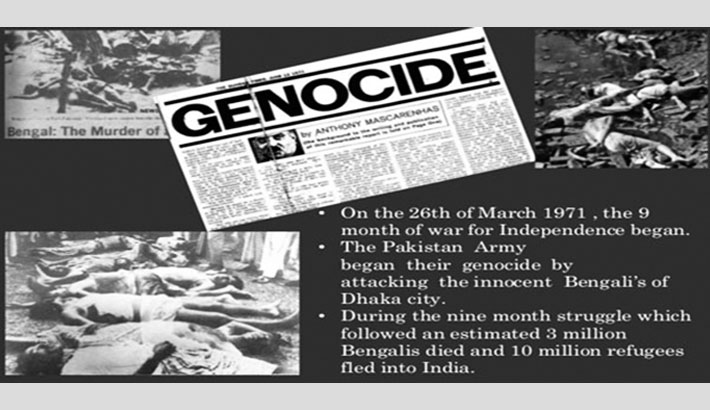 The parliament, during its 14th session on 11 March 2017, unanimously adopted a resolution to observe “March 25” as “Genocide Day”. The legislators insisted on gaining “International Recognition” of the world’s one of the most barbaric genocides on the people of Bangladesh committed by the Pakistani Army and their local collaborators. This initiative not only makes us realise ourselves as citizens of a “proud nation” but also harks back to the “black night” of 25 March 1971.

Back in 1971, Bangladesh was born as an independent State on 16 December after the long 9 months arduous and bloody Liberation War beginning from March 25 night. Looking at a little back, the Awami League (AL) under the leadership of Bangabandhu Sheikh Mujibur Rahman became the majority party of Pakistan by winning 167 seats out of 169 seats of the Pakistan National Assembly in December 1970 general election. However, Zulfikar Ali Bhutto, the elected leader of West Pakistan, conspired not to hand over the power to Bangabandhu to form the government as democratic norms required. On 22 February, the generals in West Pakistan set in purpose of suppressing the AL and its followers.
On 1 March, a storm of protest throughout the territory of the then East Pakistan (now Bangladesh) started when General Agha Mohammed Yahya Khan suddenly postponed the National Assembly session. On 3 March, the AL called a countrywide general strike with Bangabandhu’s demand to the President for immediate transfer of power to his party. Subsequently, on 7 March, Bangabandhu declared in his historic speech at Racecourse ground that, ‘[t]he struggle this time is a struggle for emancipation. The struggle this time is a struggle for independence. Joi Bangla!’ (Fifth Schedule of the Constitution of the People’s Republic of Bangladesh).

The moment we move forward to the night of March 25, the declaration of General Yahya Khan at the February conference hits in our mind. He declared, ‘[k]ill three million of them [the people of Bangladesh] and the rest will eat out of our hands’ which is explicitly regarded as a campaign of genocide (Robert Payne, ‘Massacre: The Tragedy at Bangla Desh and the Phenomenon of Mass Slaughter throughout History’ (Macmillan Company, 1st ed., 1973) p. 50). In execution of this deadly declaration, the Pakistani Army launched the “Operation Searchlight” to disarm and liquidate the Awami Leaguers, Bangalee policemen, soldiers, military officers, and to arrest, kill and round up the professionals, intellectuals, students, and the people in general. It is thus considered that the bases for designing such shocking master plan were, inter alia, the AL’s actions as well as reactions to be treated as rebellion and its widespread support amongst the people of the then East Pakistan (The ICTBD Case Concerning Kamaruzzaman, p. 186).

It has been mentioned earlier that this particular strategy targeted mainly the Awami Leaguers, Bangalee policemen, soldiers, and military officers, various professionals, intellectuals, and students along thousands of men, women, and children of Bangladesh. In this regard, Rudolph Joseph Rummel lucidly drew the whole world’s attention to his observation that:

‘[i]n East Pakistan [General Yahya Khan and his top generals] planned to murder its Bengali intellectual, cultural, and political elite … they planned to destroy its economic base to insure that it would be subordinate to West Pakistan for at least a generation to come.’ (Rudolph Joseph Rummel, Statistics of Democide: Genocide and Mass Murder Since 1900 (LIT Verlag Minister, 1900) Ch. 8, Table 8.1).

Unfolding it in a single sentence, the intention of the Pakistan policymakers and executors of such policies was to kill the Bangalee nationalism at a single stroke. Looking from the legal perspectives, killings of such people of significantly “political group” and primarily “national group” are roofed as “Genocide” under Section 3(2)(c) of the International Crimes (Tribunals) Act, 1973 (ICT Act) of Bangladesh and various international laws and customs.

The beastly attack and genocidal acts of the Pakistani Army on the people of Bangladesh initiated on the night of 25 March 1971 is nothing less grave than the genocide of Christians in the Ottoman Empire during the World War I, Japanese rampages in China, the Nazi genocides in Eastern Europe during the World War II, Rwanda genocide, Bosnian genocide etc. The whole of Bangladesh was flooded by the blood of patriotic martyrs as well as innocent and defenceless people. Their only mistake was that they started to claim for their legitimate rights from the West Pakistani rulers. Nevertheless, the Pakistan government still denies the fact of the genocide committed by its Army against the people of Bangladesh in 1971.


Addressing this issue, the present Prime Minister Sheikh Hasina very recently said that, ‘the recognition of March 25 was crucial as the Pakistan government in recent times repeatedly tried to deny the atrocities its army carried out on the innocent Bangalees.’ She also said that, ‘Bangladesh now has emerged as a role model of development drawing the attention of the global community ... so, Pakistan now has adopted a new approach to distort the history.’ Truth be told, this reality is above politics while the denial of Pakistan is a denial of the sacrifices of millions of proud sons and daughters of the sacred soil of Bangladesh.

What is resolute to observe “March 25” as “Genocide Day” is certainly a great initiative to commemorate as well as to obtain “International Recognition” of the brutal genocide committed by the Pakistani Army and its local collaborators against the innocent people of Bangladesh.

The writer is a researcher in International Criminal Law and a faculty member of the Department of Law, East West University, Bangladesh