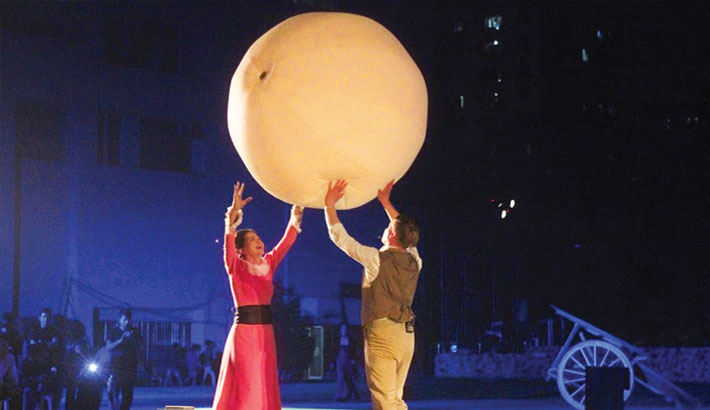 Chekhov Theatre Studio, a renowned theatre troupe from Russia, visited Bangladesh from February 6-10 to stage its two famous productions ‘The Seagull and Chekhov’ and ‘The Bear’ at Bangladesh Shilpakala Academy, Dhaka.

On 9th February they staged the famous play ‘The Seagull’. ‘The Seagull’ by Anton Chekhov is a four-act naturalistic play set in the Russian countryside at the end of the 19th century. The characters of the play were dissatisfied with their lives. The first three acts were staged at an open stage in the field, while the last act was staged at National Theatre Hall, BSA.

The play portrays the romantic and artistic conflicts between four characters: the famous story writer Boris Trigorin, young talented actress Nina, the fading actress Irina Arkadina and her son the symbolist playwright Konstantin Treplev. Sorin, the brother of Arkadina, lives in the countryside with Konstantin Treplev, son of Arkadina. Arkadina comes for spending her vacation with her lover, the writer Trigorin. Sorin and his guests gather at an outdoor stage to watch an unconventional play written and directed by Konstantin. The play-within-a-play features Nina as the "soul of the world". The play is Konstantin's latest attempt to create a new theatrical form, and is a dense symbolist work. Arkadina finds the play ridiculous and incomprehensible; the performance ends prematurely after audiences’ interruption and Konstantin storms off in humiliation.

The play is based on various romantic triangles. The schoolteacher Medvedenko loves Masha, the daughter of the estate's steward. Masha, in turn, is in love with Konstantin, who is in love with Nina. Nina loves Trigorin. Two years later, Masha finally accepts Medvedenko's marriage proposal, and they have a child together but Masha still nurses an unrequited love for Konstantin. Nina and Trigorin live together for a time until Trigorin abandons her and goes back to Arkadina. Nina has never achieved any real success as an actress, and is currently on a tour of the provinces with a small theatre group. Konstantin has had some short stories published, but is increasingly depressed. One day Nina comes to Konstantin and says "I am an actress". She is forced to tour with a second-rate theatre company after the death of her child, but she seems to have a newfound confidence. After Nina’s disappearance, Konstantin burns all his manuscripts and commits suicide.

Chekhov studio staged ‘The Bear’, jointly directed by Vladimir Baycher and Tatiyana Phediushina, on February 10 at the Experimental Theatre Hall, BSA.
In the play, Elena Ivanovna Popova mourns the death of her husband deeply. Her servant, Luka, tries to console her and encourages her to leave the house finally. Popova stubbornly refuses, citing the pretext that she must remain faithful to her husband. Smirnov, one of Popova neighbours, demands that she must return the money that was borrowed by her late husband. As she does not have money and she is not in the mood to deal with financial matters, she tells him to come again the day after tomorrow but Smirnov refuses her proposal. After a long conversation Smirnov exclaims that if Popova, as a feminist, really wants equality, he will leave his demand to her if she faces a duel. Surprised by her acceptance of his challenge, Smirnov begins to fall in love with this woman. After instructing her on how to use a pistol, he is forced to admit that he is beginning to like her. Marina Suvoroga, Sergui Fathinav and Euri Golishev portrayed the characters of Popova, Luka and Smirnov in the play.

Such energetic performances of Chekhov Theatre Studio enthralled Dhaka audiences. The theatre troupe was satisfied as well with such a huge response.   e