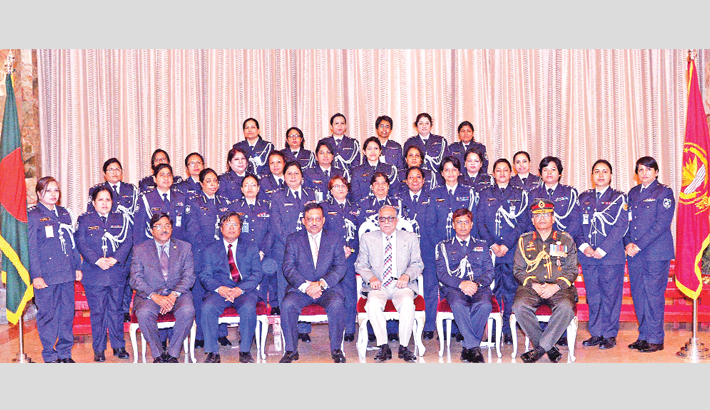 Top-ranking women police officials pose with President Abdul Hamid at a programme at Bangabhaban in the city on Wednesday, marking the ‘Police Week-2017’.-BSS photo

"Your main responsibility is to ensure internal security of public life and property, establish the rule of law, combat terrorism and militancy," he told senior police officials at a meeting on the occasion of Annual Police Week-2017 at Bangabhaban.

But, he said, the police force must uphold "human rights" and "democratic values" in delivering their services with a pro-people and people-friendly attitude.

"Getting the security of life and property is the right of people, it is not a matter of mercy," the president said.

Police Week's speech when he had asked police personnel to "serve, love and help people in their time of difficulty".

The President said the police had a crucial role in the national development as well as "internal peace and discipline is the prerequisite to the development of the country".

He lauded police's role in clamping down terrorism or militancy and quickly exposing the culprits to justice in many sensational cases to build confidence among the common people.


The president noted police's outstanding contribution to the UN peacekeeping missions abroad "upholding the image of the Bangladesh in the world arena".

He suggested police to increase efficiency and knowledge in information and communication technology (ICT) and other techniques particularly to curb cyber crimes.

"Effective measures must be taken to combat crimes identifying the pattern of the area-based crimes," he said.

He asked policemen to be firm in discharging their duties to establish social peace and justice.

"You must ensure that no criminal can get rid of justice while no innocent person is exposed to unnecessary harassment," the president added.