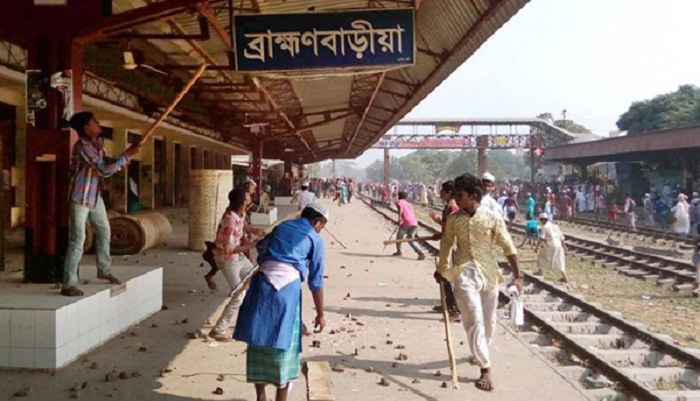 Six cases have been filed against some 5,000 people in connection with Tuesday’s violence in Brahmanbaria district town over the death of a madrasah student in a triangular clash.

Of the cases, five were filed with Sadar Model Police Station while the other one was lodged with Akhaura Government Railway Police Station, UNB reports.

Sub-inspector of Sadar Model Police Station Rubel Farazi filed a case for preventing police from discharging their duties and torching vehicles while Dr Rana Nurus Sams of Sadar Hospital a case for vandalising the hospital and Industrial School authorities lodged a case for ransacking the institution.

Two other cases were filed in connection with the vandalism at Proshika office and Soukhin Parda House go-down.

On Tuesday, madrasah students went on a rampage through the district town, protesting the death of a fellow student in a clash.

They vandalised 12 establishments, set fire to two others and blocked the trail tracks during their daylong violent demonstrations.

Masudur Rahman, who was injured in the clash on Monday, succumbed to his injuries at a local hospital early Tuesday.

At least 20 people, including Masudur, were injured in a triangular clash among the madrasah students, local traders and activists of Bangladesh Chhatra League over a trifling matter at Zilla Parishad Market in TT Road area on Monday evening.