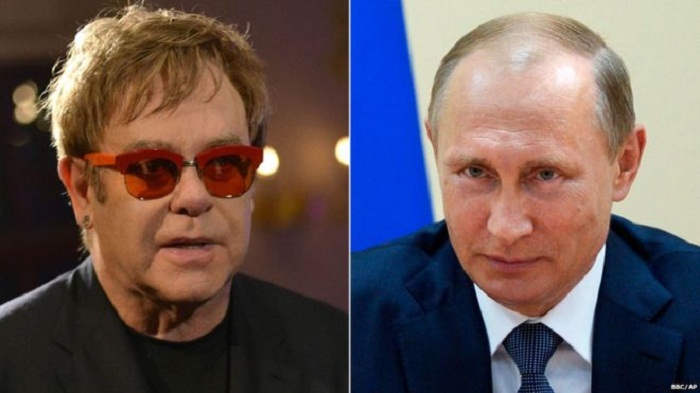 The pop star has said he wants to talk to Putin about his "ridiculous" attitude to the issue - but previously fell victim to prank callers pretending to be the Russian leader.

Speaking to BBC Radio 4, the star said he had now received a genuine call from the president.

"As soon as I can get a date in my diary that coincides with him, then I will be going... to Moscow and I will meet him," he told the Today Programme.

Russia has faced international criticism for its laws on homosexuality, including a 2013 bill prosecuting people for providing information about homosexuality to people under 18.

A report by Human Rights Watch last year said Russia was failing to prevent and prosecute homophobic violence amid a rise in attacks against minorities.

Speaking to the BBC in September, Sir Elton said Putin's attitude to gay people was "isolating and prejudiced".

He said he would like to speak to the president, although "he may laugh behind my back... and call me an absolute idiot".

Later, a message on the musician's Instagram account thanked Putin for "reaching out" in a phone conversation.

But Kremlin spokesman Dmitry Peskov said reports of a conversation were "not true" and a recording of the hoax phone call was later aired on Russian TV.

A few days later, Putin contacted Sir Elton personally, and asked him not to be offended by the prank.

Earlier this week, Northern Ireland's Assembly narrowly voted in favour of same-sex marriage for the first time - but the largest party in the devolved parliament, the Democratic Unionists, vetoed any change in the law, on the basis that only four unionists had backed the proposal.

"The politicians need to get their act together and enter the 21st Century," Sir Elton told Justin Webb, saying he was "sure" that a same-sex marriage law would "sail in" if the public were allowed to vote.

A survey by the BBC and Irish broadcaster RTÉ published yesterday suggested that almost two-thirds of people in Northern Ireland would feel comfortable if a family member had a same-sex marriage.

Sir Elton rejected suggestions he would avoid playing concerts in Northern Ireland as a result.

"I'm not a politician," he said, "but I will speak out for rights when I can, and especially LGBT rights as I'm an elderly gay citizen."

Sir Elton has also teamed up with the US government to donate $10m (£6,5m) to organisations in sub-Saharan Africa who work with lesbian, bisexual, gay and transgender people suffering from Aids or HIV. He says the stigmatisation they suffer "allows Aids to spread".

"I think it's going to make an awful lot of difference because we can get medicine to people who [are] being ostracised," he said.

But the star admitted he would have to "tread carefully" around politicians and religious leaders in the continent, many of whom insist that homosexuality is an aberration.

"It's not going to be easy. But it's getting the medicine to the people who need it on a daily basis so the HIV and Aids epidemic doesn't spread any further.