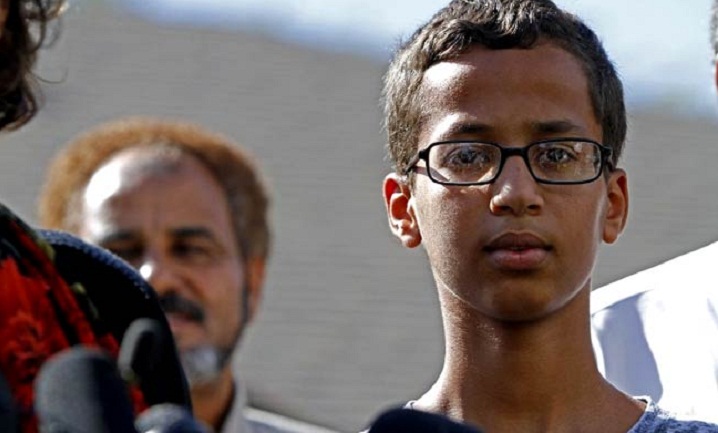 Houston, Texas:  Ahmed Mohamed, the 14-year-old Muslim schoolboy, who was arrested last week in the US after his homemade clock was mistaken for a bomb was the surprise guest at the fifth annual Google Science Fair in California.

Ahmed, a Sudanese-American engineering enthusiast from Irving in Texas who captured the most attention of all never entered the competition. Young scientists showed off projects that are finalists in the fair yesterday.

He visited the booths of finalists whose faces lit up when they recognised him. He also talked with local students visiting the science fair being held on Google's headquarters in Mountain View.

"We learned about you in school," a student said. Google puts on the science fair each year with the goal of inspiring scientific curiosity and exploration among young people. The theme this year: "It's your turn to change the world.

Ninth grader Ahmed had brought a digital clock, made from a pencil case, to his school in Irving to show it to his teacher who mistook the clock to be a bomb. Hours later, he was handcuffed and arrested by school resource officers as part of "standard procedure".

The incident has created an outrage in the country with messages of support pouring in from Obama, Democratic presidential frontrunner Hillary Clinton and Facebook co-founder Mark Zuckerberg.

"It's imperative for us to support and encourage our young people to explore and challenge the world around them through scientific discovery. Which is why we're especially glad that Ahmed Mohamed ... took us up on our invite to attend this year's event," said Mariette DiChristina, editor in chief of Scientific American and chief judge of the Google Science Fair.

"Curious young scientists, inventors and builders like him should be encouraged and empowered," he said. The hashtag #IStandwithAhmed took the Internet by storm as people questioned if this inventive teen who likes to tinker with electronics and dreams of attending MIT was targeted because of his name or religion.

Google says the science fair is among the world's largest. The grand prize for the winner is a USD 50,000 scholarship from Google.