Paul Pelosi attack: Violent extremism warning ahead of US election

The violent attack on Speaker of the House Nancy Pelosi's husband comes with just over a week to go before the US midterm elections - a moment when political tensions are coming to the boil.

As if to emphasise this point, just a few hours after news of the assault on Paul Pelosi on Friday, the US government distributed a bulletin to law enforcement across the nation. It warned of a "heightened threat" of domestic violent extremism against candidates and election workers driven by individuals with "ideological grievances".

Also on Friday, the US Department of Justice announced that a man from Pennsylvania had pleaded guilty to making multiple phoned death threats against an unnamed congressman - reported to be Democrat Eric Swalwell of California. The threats included telling a staff member in the congressman's Washington office that he was going to come to the US Capitol with a firearm.

These wailing klaxons of a political system in peril come as Republicans and Democrats frame the upcoming midterm voting, which will determine which party controls Congress next year, as a pivotal moment in American history.

Republicans warn this is the last chance to put a check on Democrat Joe Biden's presidency. Democrats say American democracy itself is at stake because of the numerous Republican candidates who have refused to accept the results of the 2020 presidential election.

And the rhetoric comes at the culmination of what has been a steady drumbeat of violence - and violent threats - that has been building all year.

In Arizona, there have been multiple reports of masked individuals with firearms staking out ballot drop boxes, ostensibly to monitor the sites for election fraud. They've posted photographs of individuals casting their ballots on right-wing social media sites and encouraged others to join their efforts.

In June, a man was arrested near the home of Supreme Court Justice Brett Kavanaugh. He had travelled to the Washington suburb from California and called police after he arrived to tell them he had a firearm and intended to kill the conservative justice.

The following month, Republican candidate for governor, Lee Zeldin, was attacked while on stage during a campaign rally. Congresswoman Pramila Jayapal, a liberal leader in the Democratic Party, was threatened by a man with a handgun outside her Seattle home. He was subsequently charged with felony stalking.

Republican congresswoman Marjorie Taylor Greene has had police respond to her home six times based on anonymous hoax calls. The practice, called "swatting", is used to try to provoke a confrontation between the target and law enforcement. She has also been the target of numerous death threats.

Partisan violence - and the threat of it - is nothing new in American politics, of course. The bloodiest recent attack occurred five years ago, when a man with multiple weapons opened fire on Republican politicians playing baseball at a city park. Five were injured, including one critically - second-ranking Republican in the House of Representatives, Steve Scalise of Louisiana. That, however, was an isolated incident.

Data provided by the US Capitol Police suggests a violent wave is building. The number of cases involving threats against members of Congress has increased every year since 2017. In the first three months of 2022, the department has documented more than 1,800 incidents.

In response, Capitol Police announced in July that it would cover up to $10,000 for security upgrades in the homes of congressional legislators.

There are 435 members of Congress, however. They regularly travel to and from their homes around Washington and from the nation's capital to their homes across the nation. A motivated individual fixated on violence will be able to find a way to strike against a targeted politician - or their family.

With Mrs Pelosi thousands of miles away in Washington, there was no police security provided for Mr Pelosi at their San Francisco home. He was not the intended target, but he became the victim. 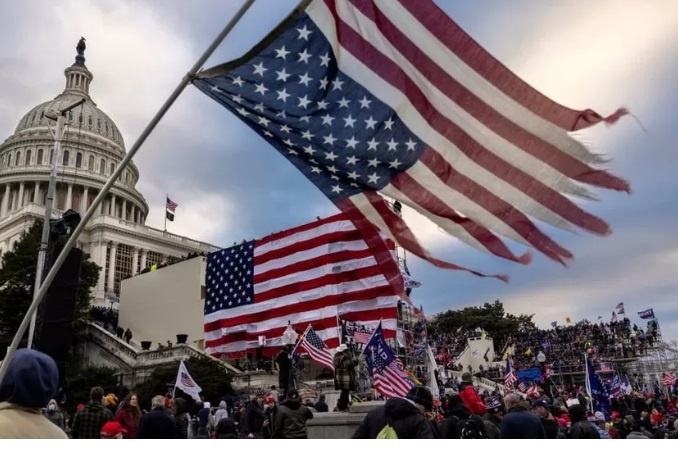 Paul Pelosi attack: Violent extremism warning ahead of US election