Devastated families in Thailand gathered Tuesday for the cremation of their loved ones, killed in a nursery massacre that claimed 36 lives -- including 24 children.

The kingdom has been stunned by the tragedy in northeastern Na Klang province, one of the worst mass killings in its history, with flags at half-mast and King Maha Vajiralongkorn visiting the families of the victims.

At Wat Rat Samakee temple in Na Klang, chanting monks began the ceremony as the exhausted and grieving close-knit rural community prepared to say a final goodbye to 19 of those killed.

"An incident like this shouldn't have happened," said Thanakorn Nueangmatcha, 39, ahead of the funeral at the temple.

"They were only children."

Other victims of the attack -- perpetrated by a former police officer, who went on to kill his wife and her child before taking his own life -- will be cremated at other temples in the area.

At Wat Rat Samakee, incense and the fading scent of hundreds of flower bouquets hung in the air as volunteers continued to prepare the adjacent area for the cremations.

The funerals, sponsored by the royal household, will end three days of rites that began Saturday.

Tuesday's mass ceremony is highly unusual -- bodies are normally cremated alone -- but the area's small local temples have been overwhelmed by the number of victims.

Temporary furnaces have also been set up at other nearby temples, local media reported.

The reeling community came together on Monday once again as volunteers, soldiers, and officials mixed cement and spread gravel to prepare a field inside the temple complex for the cremations.

They were working to build the pyres in the style of Thailand's northeast, said Maemon Meeyuan, a grandmother of one of the victims.

"We're doing it the old way," she told AFP Monday.

Prime Minister Prayut Chan-o-Cha has ordered an investigation, with police stating that they intend to interview some 180 witnesses.

The attacker, 34-year-old former police sergeant Panya Khramrab, was dismissed from his post earlier this year on a drugs charge with locals claiming they suspected he was a methamphetamine addict.

However, preliminary tests found he did not have drugs in his system at the time of the assault.

At the temple ahead of the funeral, 75-year-old Komma Charoenchai said he was "still shocked" by the nursery assault.

But he said the community must "let the authorities handle the matter." 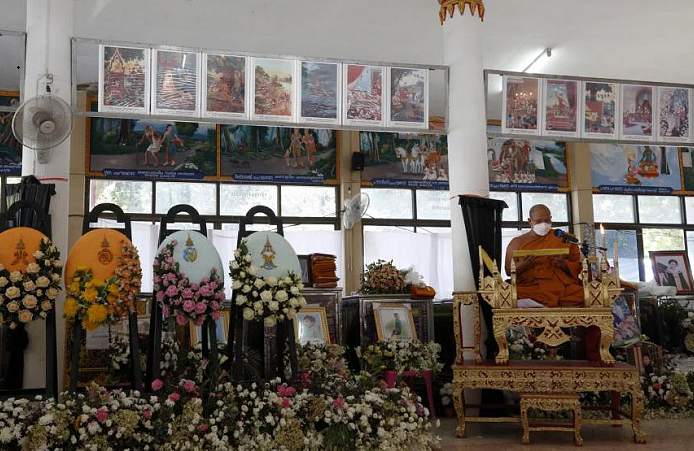