Foreign Minister AK Abdul Momen has welcomed the formation of the Canada Bangladesh Alumni Association (CBAA), as an effective public as well as economic diplomacy tool to augment bilateral relations between Bangladesh and Canada.

He made these comments during a courtesy call on by a delegation led by the President of the Executive Council (EXCO) of CBAA Khorshed Khastagir at the Ministry of Foreign Affairs, said a press release on Thursday (Sept 15).

The delegation further informed the Foreign Minister that recently the CBAA got incorporated (No. CA-182398/2022) with the Registrar of Joint Stock Companies (RJSC) under section 28 of the Companies Act 1994, after obtaining the necessary approval for license by the Ministry of Commerce. 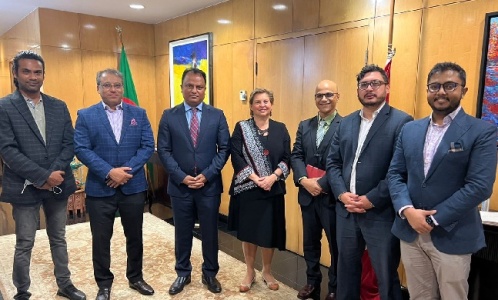 Foreign Minister Momen assured all cooperation and instructed DG (Public Diplomacy) to liaise with the CBAA to undertake mutually beneficial/agreed initiatives to realize the full potential of such a platform.

Honorary Co-Chair of CBAA EXCO High Commissioner Nicholls also welcomed the formation of CBAA and assured them to extend support during her tenure in Bangladesh. Congratulating the EXCO delegation for incorporating of the CBAA with RJSC, Senior Secretary (Commerce) Tapan Ghosh expressed willingness to work together with CBAA, including extending all support for effective use/engagement of the platform to further enhance bilateral trade and investment relations between the two countries.

The CBAA aspires to encourage more people to people contact to create a shared community aiming to further promote more opportunities for Canada as a preferred destination for quality education; promote art and culture; organize formal and informal gatherings/events to discuss economic, trade, and investment opportunities; create new and innovative partnerships/business opportunities for the knowledge economy; undertake social development projects and the like.

The CBAA EXCO delegation thanked the Ministry of Foreign Affairs, the High Commission of Canada in Dhaka, and the Ministry of Commerce, respectively, for extending all cooperation during the incorporation and expressed high optimism and readiness to undertake collaborative efforts and initiatives supporting further growth of the bilateral relations between Bangladesh and Canada.