Humans' Gemma Chan: 'You're more likely to see an alien in a Hollywood film than an Asian woman'

Barely two minutes have passed with Gemma Chan before a middle-aged man, slightly overawed, sidles over to our table to tell her how brilliant she is. The 32-year-old actress is warm, gracious, pleased. “It’s been happening quite a bit recently,” she says. “Well, since Humans.”

A chilling allegorical study of race, sex, gender roles and mankind’s fears of technological advancement, the series – which concludes Sunday – has been Channel 4’s biggest original drama hit for a decade, with more than four million watching the opening episode.

And Chan, playing a domestic robot (or “synth”) who shows signs of sentience, is its flawless fulcrum, by turns eerie and ethereal. The Telegraph’s critic described her as “wonderfully plausible”.

In person, dressed in rolled-up jeans and Converse and wearing scarcely a scrap of make-up, Chan may not have the synth sheen of her character, Anita, but she is no less beautiful and unblemished, with long, lithe limbs and perfect posture.

There is a mechanical efficiency to the way she answers questions about Humans – the result, no doubt, of months of practice. Get her talking about her new favourite film, however – Pixar’s Inside Out – and her brown eyes light up and an effusiveness emerges from beneath the veneer.

It’s only when I mention her boyfriend, the comedian Jack Whitehall, whom she met four years ago on the set of the Channel 4 sitcom Fresh Meat and now lives with in Notting Hill, that she bristles. “If I answer one question about him,” she says, “it tends to become the headline and then my heart sinks.”

Humans will have changed that. Indeed, you only have to stroll around London to see how much the series has increased her profile: her character’s electric-emerald eyes (she wears contacts in the show) are everywhere, staring out from posters plastered across hundreds of double-decker buses.

The drama, which has been commissioned for a second series, has also been a success Stateside, meaning Chan can expect to be flooded with film offers. She has already begun shooting in Italy for Stratton, an action thriller starring Dominic Cooper; London Fields, an adaptation of Martin Amis’s book with Billy Bob Thornton and Cara Delevingne, is in post-production.

“[Humans] has definitely had the biggest impact of anything that I’ve done,” says Chan, who has previously had supporting roles in shows including Doctor Who, Sherlock, Secret Diary of a Call Girl and the hit indie film Submarine.

Filming Humans was far from easy, though. As Anita, Chan had to somehow strip away all the nuances of human expression. 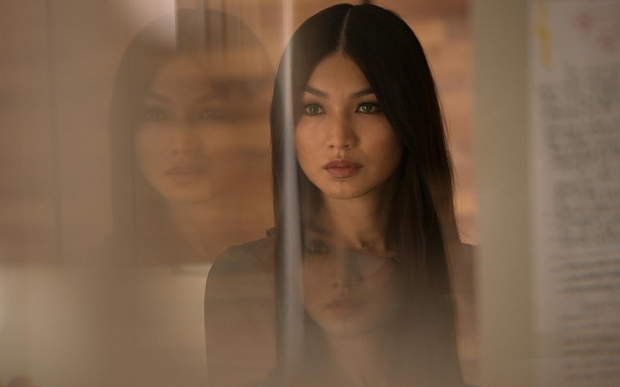 “At the beginning I thought my head was going to explode,” she says, “because you’re trying to play the scene and act truthfully in it but within the rules that you’ve set-up for. As a human, you don’t have to be too conscious of your movement. I think it’s tougher playing a robot than a human, and even tougher playing a robot who begins showing traces of being a human.”

As preparation for the part, Chan attended “synth school”, where choreographer Dan O’Neill taught her, along with the other actors playing robots, the graceful and smooth movements needed to portray the cyborgs in the series.

“The director didn’t want anything robotic in a clichéd or a jerky way,” she says. “I was given a lot of homework: I had to practise ironing as a synth, practise washing up as a synth, cooking a meal as a synth. It’s definitely the most prep I’ve had to do for a role.”

Sometimes the obstacles Chan faced while playing Anita were more literal, such as a table or a set of stairs.

“At the wrap party,” she says, “they showed the out-takes and it was like Humans the Sitcom, with a load of clumsy robots bumping into things. In an early scene, I was going down the stairs with a basket of washing and, of course, I wasn’t allowed to look down. I miscounted the number of steps and suddenly just fell out of the shot. The crew p----- themselves laughing.”

The themes of the show – mankind’s hubris and looming obsolescence – follow the familiar contours of countless sci-fi stories dating as far back as Shelley's Frankenstein. And yet, right now, they couldn’t be more timely: earlier this year, Stephen Hawking and Elon Musk, among others, warned that the development of full artificial intelligence “could spell the end of the human race”, while, in June, the first entirely robot-staffed hotel opened in Japan.

This is partly why Humans and Alex Garland’s film Ex Machina have proved so popular with viewers, says Chan. “The technology doesn’t feel like it’s a hundred years away anymore,” she remarks. “It’s practically here.”

Chan is intelligent and naturally curious about the world and could easily have applied these characteristics, as well as her many other talents, to a career outside of acting. As a child growing up near Sevenoaks in Kent, she swam competitively to national level, learnt ballet and played the violin to a high standard. After school, her mother, a Chinese-Scottish pharmacist, and father, an engineer from Hong Kong, encouraged her to enrol at Oxford University to read law – which she was happy to do.

When she graduated, however, she turned down a training contract at leading firm Slaughter and May, opting instead to spend a year working as a model so that she could afford Drama Centre London – much to her parents’ initial dismay.

“They were understandably worried,” she says, “because it’s an uncertain profession.” Indeed, one of the reasons Chan didn’t pursue an acting career previously was because “growing up, I never saw any Asian faces on TV, so it didn’t feel like a viable option”.

Does she think there is still a lack of ethnic diversity on television?

“Yeah, there’s definitely still a lot of room for improvement.”

Has her career been hindered by it?

“I’ve been fortunate in my career,” she says, “but, yes, there have been many times when I have been told my audition has been cancelled because they’re only going to see white people.”

As our conversation veers towards the issue of on-screen gender balance, Chan becomes increasingly vehement. "The statistics are really depressing," she laments. "I remember reading some that made me think, ‘Oh, you are more likely to see an alien in a Hollywood film than an Asian woman.'"

She thinks Humans should be congratulated for the way it has tried to promote female representation and diversity – even if almost all of the non-white actors on the show play synths.

Who would be her ideal synth, I wonder?

“I’d want one like Samuel L Jackson,” she says. “If I ever got into any tricky situations, he could just stare people down. Parking ticket? Just set Samuel Synth on them.” She laughs. “That would be amazing.”