The Kingdom of Morocco deplores with regret an assault of high violence that have been perpetrated at the level of the city of Nador (Oriental region of Morocco), on June 24, 2022.

This assault was conducted by organized international mafia networks that engage in human trafficking by bringing migrants from outside Morocco, according to a message received from Rabat.

What happened demonstrates the extreme danger and violence of the trafficking networks, which are ready to take any risk in total violation of the dignity of human life.

This assault was carried out with great violence, in a planned way, with seasoned and trained leaders, armed with machetes, stones, knives and sticks, who attacked the law enforcement forces.

The Kingdom of Morocco naturally remains committed to strengthening the anchoring of its humanist and solidarity-based migration governance in terms of the protection of vulnerable migrants and victims, and to continue its fight against human trafficking networks, which taint the noble dimension of migration.

The Kingdom of Morocco remains determined to strengthen cooperation with all partners in the framework of a shared responsibility for better regional security. 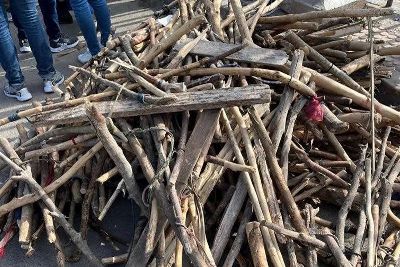 The Moroccan authorities are waging a fight mercilessly against more than 1300 networks that were dismantled the last 5 years, similarly, more than 360,000 irregular emigration attempts have been aborted since 2017.

The Kingdom of Morocco will continue its merciless and relentless fight against trafficking networks and strengthen its cooperation with its partners in the framework of shared responsibility and its major contribution to regional security.

Since 2013, King Mohammed VI advocates an active South-South cooperation, which places the human element at the center of actions, projects and initiatives. In this sense thousands of sub-Saharans live in Morocco, some study there (more than 12,000 students via the cooperation channel, 90% of who are scholarship holders of the Kingdom), others work there.  In any case, they are all fully integrated.

This ambitious integration policy allows today's regularly established African nationals to be real incubators of potential that enrich the vitality and diversity of Moroccan society and we are proud of this civilizational connectivity that they anchor between our respective countries.

Moreover, it is this humanistic logic that today structures Morocco's migration governance around the National Strategy for Immigration and Asylum (SNIA), initiated by King Mohammed VI, in 2013. The National Immigration and Asylum Strategy, which is intended to be a policy that respects the dignity and rights of migrants as well as an inclusive policy for migrants, in all the services to which the national have access, such as (education, employment, accommodation, health, vocational training, etc.)

Under the leadership of King Mohammed VI, Morocco has always pleaded for humanist, global, pragmatic and responsible migration making Morocco a true land of welcome and hospitality, this has allowed the regularization of tens of thousands of sub-Saharans, by allowing them to benefit from the same public services as Moroccan citizens. (More than 50,000 nationals of friendly African countries have regularized their administrative situation).

King Mohammed VI has always considered South-South cooperation as a major lever for leveling development differentials and stabilizing regions that provide migrants. The concrete co-development actions initiated by the Sovereign demonstrate this vision of solidarity. Morocco is also ready to cooperate fully with its African friends and brothers through the exchange of expertise and cross-training.