The opening of the country's southern region people's long-cherished dream Padma Bridge has ignited a hope of changing the living standard of the fishermen here as one-third of the district's total population is directly involved in fishing.

The fishermen are eagerly waiting for a positive change in their socioeconomic condition, hoping that the bridge will ease the ways of fish farming, collecting and marketing as fishes collected from the sea are primarily brought to the country's second largest fish landing center in Patharghata upazila of the district.

Official of the Fisheries Department, Barguna, said there are about 41,000 seafaring fishermen registered in six upazilas in the district while development agencies projected the number would exceed half a lakh.

President of Taltoli Fishermen's Association Dulal Farazi said once the bridge is inaugurated, there will be a radical change in the fishery businesses.

"All the people involved in fish trading from wholesaler to marginal fisherman will get the benefits and revenue collections will increase as well," he added.

Barguna Trawler Owners' Association President Golam Mostafa Chowdhury said the fishes brought to the Patharghata fish landing center are supplied to different parts of the country including the capital Dhaka by road.

"But due to the traffic congestion at the ferry ghat, the fishes used to get rotted as those could not reach the destination timely. Therefore, the price of fish would go down," he said.

He added that the bridge will relieve the fish traders from anxiety of counting loss due to traffic jams.

Trawler Workers' Union President Abdul Mannan Majhi said many trawlers of seafaring fishermen do not come to the Patharghata fish landing center due to traffic congestion.

But, after inauguration of the Padma Bridge, they will come here for selling their fishes, which will help increase the revenue collection, he said.

Patharghata fish landing center Manager L Lutfar Rahman said about 25,000 tonnes of marine fish was sold at this landing center in the fiscal year 2021-22, half of which was hilsa.

Noting that the government collects 1.25 percent revenue on fish sold at the landing centers, he hoped the unprecedented development of road connectivity through the Padma Bridge would increase the revenue collection from fish trading and improve the socioeconomic condition of the fishermen.

Zakir Hossain, a fish wholesaler in Amtoli town, said, "Apart from supplying fish to other parts of the country, we will be able to make more profit by importing fishes, which are less available here, to Barguna from other parts through the Padma Bridge".

Senior Fisheries Officer at Fisheries Department Halima Sarder said usually the people of this district cultivate fishes as their hobby and for commercial purposes as well.

But their marketing was limited to Barisal and Khulna divisions, she said, adding that with the launch of the Padma Bridge, the marketing system will be changed rapidly, creating more new entrepreneurs.

Despite the potential, the fisheries sector of the district could not yield expected outcomes due to the poor communication system, he said.

But, the opening of the Padma Bridge will bring about a great affirmative change to the fate of the fishermen here, he added. 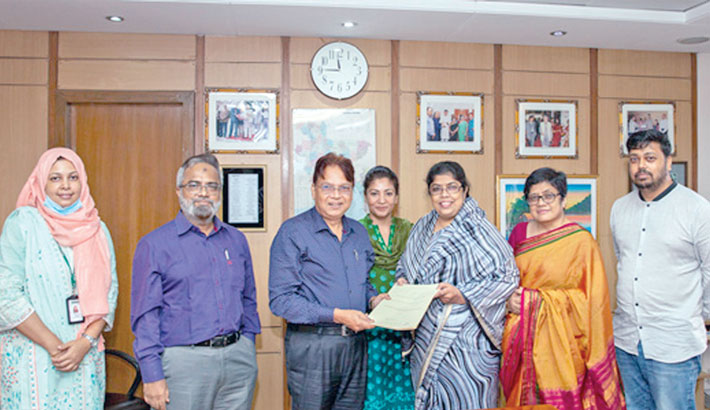 Lawmaker Dr Anwar Hossain Khan speaks as the chief guest at a view-exchange meeting at the auditorium of Ziaul Haque High School and College in Ramganj upazila of Lakshmipur district on Tuesday after laying the foundation stone of the educational institution. – Sun Photo