A military officer and a weapons scientist have died under mysterious circumstances in Tehran, fuelling tension between Iran and Israel, reports the Business Insider.

Military officer Colonel Ali Esmaelzadeh died under unverified circumstances on Friday. The New York Times reported that various sources said his death was either an assassination, a suicide, or an accident.

Esmaelzadeh died just one week after the drive-by-shooting and the subsequent death of Colonel Sayad Khodaei outside his home in Tehran, another high-ranking officer in the same unit as Esmaelzadeh.

The New York Times reported that an official briefed on official intelligence has confirmed Israel informed US officials that they were responsible for the killing of Khodaei.

However, the paper also reported that two Israeli officials denied that the state was involved in the death of Esmaelzadeh.

Both Esmaelzadeh and Khodaei were officers in the Islamic Revolutionary Guards Force, Unit 840, a group that President Donald Trump labeled as a terrorist organization. Israel alleges it runs missions to kill foreigners abroad, according to The New York Times.

The paper also reports that the Israelis advised the US officials that the assassination of Khodaei was a warning sign to halt the operation of Unit 840, of which he was allegedly the deputy commander.

In reaction to Khodaei's death, General Hossein Salami, the commander in chief of the Revolutionary Guards, said in a speech on Monday that "none of the enemy's evil actions will go unanswered."

Iran's state Tasnim news agency released a statement from the Islamic Revolution Guards Corps regarding the death of Khodaei, in which IRGC spokesperson General Ramezan Sharif said that "the thugs and the remnants of terrorist groups affiliated with the global arrogance and Zionism will be given punishment for their criminal act."

Amid the tensions, Israel warned citizens on Monday against traveling to Turkey, as they believe Tehran could be seeking revenge for the assassination, Reuters reported.

Along with the deaths of these men, Ayoob Entezari, an Iranian aerospace engineer who worked on developing missiles and drones, according to the Times of Israel, died under mysterious circumstances in Tehran.

Israeli newspaper Haaretz writes that Entezari is thought to have died from food poisoning, per an Iranian website report on Saturday.

It followed a report in The New York Times of a drone attack on a military base near Tehran that left an Iranian engineer dead and another person injured.

The enmity between the Jewish state and the Islamic republic is fuelled by multiple geopolitical factors, including the Israel-Palestine conflict – in which Iran has previously advocated for a Palestinian intifada to remove the "cancerous tumor" of Israel – and Israel's belief that Iran is building nuclear weapons, although Iran disputes this.

In November 2021, Israeli officials said they were preparing for a potential conflict with Iran to prevent It from developing nuclear weapons. Israeli Foreign Minister Yair Lapid said that "if a terror regime is going to acquire a nuclear weapon, we must act."

Oil is another point of contention between the two countries. Israel reportedly attacked at least a dozen Iranian oil tankers bound for Syria in 2021, a violation of US and international sanctions on the country.

In 2021, Israel accused Iran of intentionally orchestrating an oil spill in an act of "environmental terrorism." The spill covered 90% of Israel's 120-mile Mediterranean coast with roughly 1000 tons of black tar. 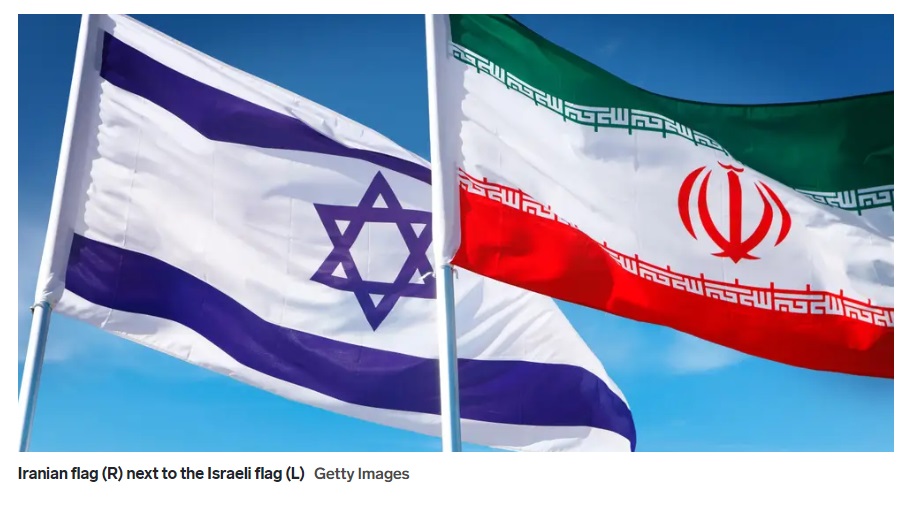