In a message, the head of the state said the natural beauty of rural Bengal, the simple life of the common people, the misery and the struggle of the people were the main theme of Abedin's paintings.

He said that he won a gold medal for his watercolor painting at the All India Painting Exhibition in 1938.

The President added that Zainul's work has reflected the labor and struggle of men and women against all adversities as well as the manifestation of their power.

Although he studied painting in the European style, he was not attracted to Eastern or Western painting and instead of being too ritualistic, he was attracted to reality, Hamid said.

His imagination has given the nation a lot of successful paintings such as drawing of famine of 1943, 'Nabanna' in the context of the mass uprising of 1969, and 'Monpura' for the death of millions of coastal people in the catastrophic cyclone in 1970, he said.

The fabulous and mind-blowing works of the artist has gained immense praise and recognition in the international arena, he continued. 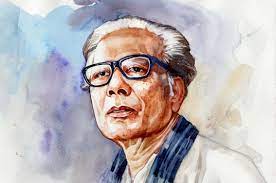 Abedin was awarded the title of Shilpacharya for his extraordinary artistic mindset and imagination, he added.

Dhaka Art College (now Institute of Fine Arts) was established in 1948 at the initiative of Shilpacharya Zainul, he said, adding that Abedin was its founding principal.

Lok Shilpa Jadughar (Folk Art and Craft Museum) was established in Sonargaon in 1975 under the patronage of Father of the Nation Bangabandhu Sheikh Mujibur Rahman and the dedicated efforts of Shilpacharya Zainul, he said.

This world-renowned artist died on May 28 in 1976 in Dhaka, Hamid said.

The President hoped that the nation will forever remember his impeccable contribution to the art industry.