MUMBAI: Bollywood actress Anushka Sharma on Tuesday (July 28) came into focus on social media when she got the spelling of former president A.P.J. Abdul Kalam wrong while expressing condolences on his demise.

Kalam died on Monday (July 27) after suffering cardiac arrest while delivering a lecture at a management school in Shillong.

According to reports, the actress spelt Kalam’s name incorrectly with a post on micro-blogging site Twitter that read: “Very sad to hear about the passing of ABJ Kalam Azad. Loss of an inspiring visionary and a wonderful soul. May his soul RIP.”

Here is a print screen of Anushka’s tweet, which she later deleted: 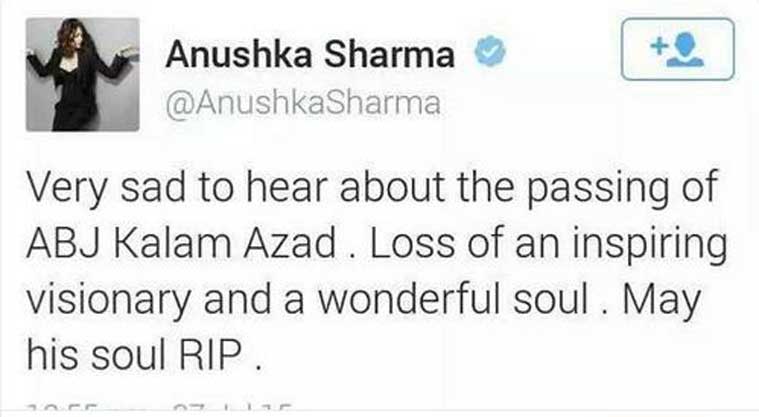 However, she realised her mistake soon and tried to rectify it, but in vain. She got the name wrong again.

She wrote: “Very sad to hear about the passing of APJ Kalam Azad. Loss of an inspiring visionary and a wonderful soul. May his soul RIP.”

The actress, who deleted her previous tweets, got it right only in the third attempt.

“Very sad to hear about the passing of APJ Abdul Kalam. Loss of an inspiring visionary and a wonderful soul. May his soul RIP,” Anushka tweeted. 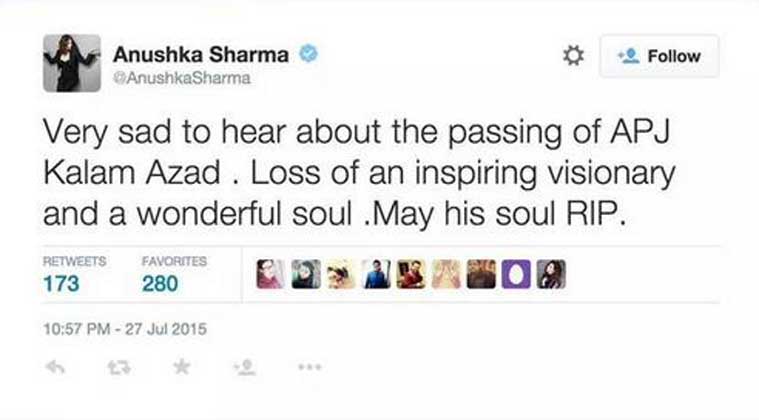 The “Dil Dhadakne Do” actress was lambasted by the users of micro-blogging site Twitter.

One user tweeted: “@AnushkaSharma 3rd time you are tweeting…I hope this time won’t be deleted ..: #RIPAbdulKalam”; while another wrote: “Congrats @anushkasharma for getting it right in just 3 attempts…great achievement considering Bollywood standards”.