Challenge of the Resurrection of Christ

The resurrection of Jesus Christ from the dead is the cardinal tenet of Christianity.  It is the hinge on which Christianity stands. Today the so-called Easter Sunday Christians all over the world celebrate the bodily resurrection of Jesus Christ after his death on Friday, which is known as the Good Friday according to Christian calendar. At the heart of the Christian faith lies the belief that sinless Jesus died for our sins and he was raised from the dead by God. Christ paid the ransom price for human redemption from the bondage of sin once for all. God vindicated His Son by raising him from the dead. So Christ did not see corruption of his body. So Christ was crucified and was also crowned. In fact we cannot conceive of the Christian faith without Jesus’ innocent and vicarious death for sinners and his resurrection. They are the two sides of the same coin. Paul proclaimed wrote his famous epistle to the first century Christians in the city of Corinth: “Jews demand miraculous signs and Greeks look for wisdom, but preach Christ crucified: a stumbling block to the Jews and foolishness to the Gentiles, but to those whom God has called, both Jews and Greeks, Christ the power of God and the wisdom of God. For the foolishness of God is wiser than man’s wisdom, and the weakness of God is stronger than man’s strength” (1Corinthians 1:22-25).

Resurrection testifies to the truth that Christ is eternal. He has authority over death and he can forgive our sins as death is the wage of sin. A believer has access to the throne of God’s grace and mercy by virtue of faith. We can stand justified before God because of the resurrection. We need to have the godly values that we preach incarnated in real life experience. Much of Jesus’ teachings were against the ritualistic worship and lip-service of the hypocritical religious teachers of his time. So he quoted them God’s utterance from the Old Testament: “This people honor me with their lips, but their hearts are far from me. They worship me in vain; their teachings are but rules taught by men” (Matthew 15:8-9).  We see in our world the marks of sins, corruption, and stress passes of all kinds. People today do not take sin seriously. But God takes sin seriously. That’s why he gave his sinless son as to die on the hated cross as ransom for sin. What should be our response? It is to repent for sins, i.e. change our ways-- 180 degree turn to God.

Christ’s pattern for life calls for a definite change in the life of the believer. This change has to be seen and felt. Christ’s holy life, love and empathy for others are of supreme value. This was true of all those who truly believed and took their commitment to Christ seriously and patterned their lives on him in history. Today human society is experiencing decadence of human values, values of sacrificial love and respect for others. Christ’s is a new humanity: grounded in God, but focusing on humanity.

The resurrection of Christ manifests that God is omnipotent and all-sovereign. He created everything in the universe himself out of nothing, ex nihilo. He has the power with which he brought his sinless son Jesus back to life.  God the Father revealed himself to Mankind and all creation, then God the Son paid the price of redemption and then God the Holy Spirit does the work of regeneration of the believers for new life, a wholly renewed life, a wholesale re-birth in faith, world-view, attitude, conduct and relationship with God and all other creation including people. We have thus a call for a total life. This involves our body, social relationships, mind and our spiritual life, which is God’s will in our lives. This is the holistic vision for the believer’s life right here and now in this world. God is just and righteous. In the resurrection he vindicated Jesus, who had six mock trials to go through at the hand of unjust people before he was crucified.

Pilate, the Roman proconsul said that he did not find any fault in him.

The Resurrection gives a clear challenge for renewal and transformation of our life, transformation of our attitude to life and to the world at large. It calls us to live in a right relationship with others. We need to rise beyond any sectarian spirituality, religious bigotry and narrow self interest. For these to happen we need to repent of our sins and submit ourselves to the leading of the Holy Spirit, the Spirit of God which raised Christ from the dead. Jesus was the man for others. He was born to die for the cause of true justice and peace. May the message of the resurrection of Christ transform our attitude to life with the values of love, respect and justice!

The writer is a Christian Theology teacher and Church leader 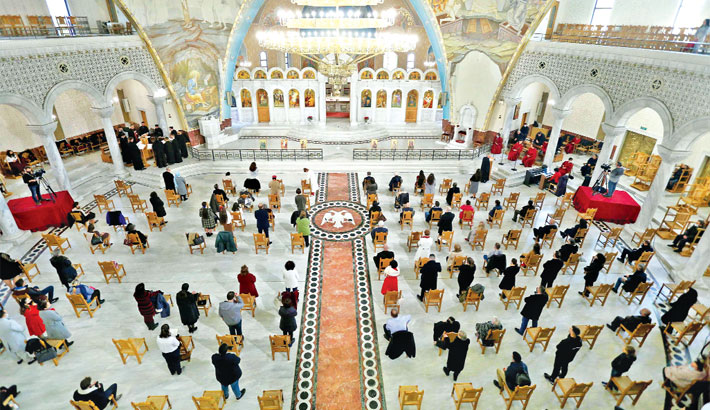