At Bappi Lahiri's funeral, a special touch - his trademark sunglasses

Celebrated composer Bappi Lahiri's last rites took place this morning, a day after his death. Bappi Da, as he was known to everyone, was given a warm send-off by family, friends and fans. His final journey, from the family home in Juhu, Mumbai to the Pawan Hans crematorium, featured the two items that Bappi Lahiri was never seen without - his trademark sunglasses were intact and there was a golden chain nestled among the garlands. Bappi Lahiri died of sleep apnea on Tuesday night in a Mumbai hospital where he was being treated for a variety of ailments. He was 69.

The funeral took place on Thursday so that the composer's son Bappa, who lives in Los Angeles, could attend. After flying into Mumbai with his family, Bappa Lahiri was pictured at his father's last rites - he and Rani Mukerji's brother Raja were among the pallbearers.

Police were present at the funeral to manage the crowd gathered and had barricaded the lane to the Lahiri residence. Son Bappa conducted the last rites and greeted the gathered well-wishers and media with a namaste after the cremation. He was accompanied by sister Rema.

The funeral was attended by family and friends, among them actress Vidya Balan, star of 2011 film The Dirty Picture in which Bappi Lahiri sang the song Ooh La La. In a tweet posted yesterday, the actress revealed that Bappi Da used to call her "Bidda" which is the Bengali pronunciation of her name.

Several other members of the Mukerji family were present apart from Raja. The Mukerjis and Lahiris are connected - both are related to the Ganguly family to which Kishore Kumar belonged; Kishore Kumar sang many of Bappi Lahiri's greatest hits.

Border star Sharbani, cousin of Kajol and Rani Mukerji, was at the funeral as was her brother Samrat. Veteran actor Biswajit Chatterjee attended as well - 1985 film Saaheb, in which he starred with Anil Kapoor and Amrita Singh, contained one of Bappi Lahiri's best-known songs, Pyar Bina Chain Kaha Re. Bappi Da also scored several of Biswajit's son Prosenjit's films. 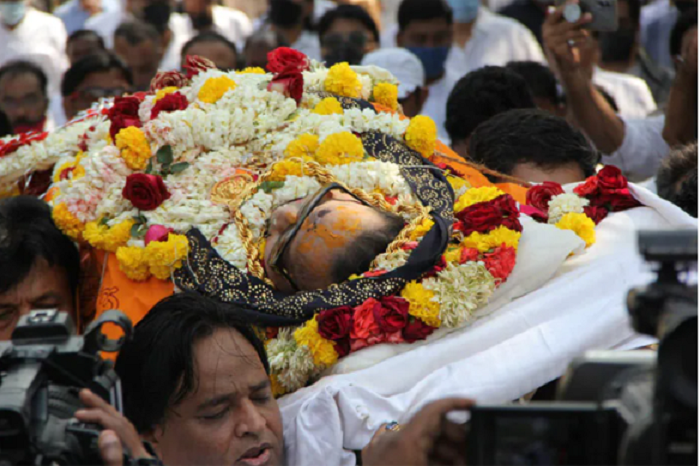 At Bappi Lahiri's funeral, a special touch - his trademark sunglasses