The High Court on Tuesday ordered the authorities concerned to take steps to close down all unauthorised brick kilns in three hill districts (Khagrachhari, Bandarban and Rangamati) within seven days.

The HC bench of Justice JBM Hasan and Justice Fatema Najib passed the order following a writ petition filed by Environment and Human Rights and Peace for Bangladesh, a human rights organization.

The court also issued a rule asking the government to explain as to why the ineffectiveness of the respondents in shutting down the unauthorised brick kilns in the three hill districts should not be declared illegal.

Apart from it, the HC issued another rule asking the authorities concerned why directives should not be given to take steps against owners of the unlicensed brick kilns under section 4,5,14 and 18 of Brick Manufacturing and Brick Kilns Establishment (Control) Act-2013.

Twenty four people including the Secretary to the Environment and Forest Ministry, Director General of Department of Environment  (DoE), DCs of the three hill districts, police supers of the three districts have been made respondentsTwenty-four to the rule.

According to the writ, many brick kilns are operating in the three hill districts without liscence and they use the mud of the hill as raw material. Besides, many trees are being used as firewood.

The report on brick kilns was carried out in the different daily newspapers, it said.

Manzil Murshid also said “No brick kilns are allowed to operate without liscence according to the Brick Manufacturing and Brick Kilns Establishment (Control) Act-2013. There is a provision of two years jail for violating the law. Despite it, brick kilns are being established and the local administration is not taking any steps in this regard.” 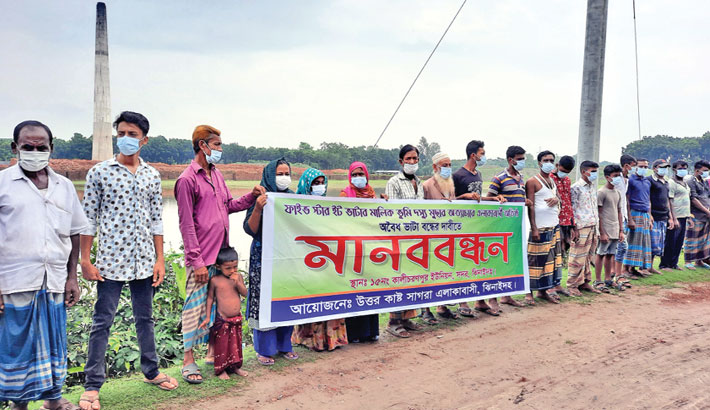 People from all walks of life form a human chain at Uttar Custsagra village in Jhenaidah Sadar Upazila on Wednesday, demanding closure of illegal brick kilns and stoppage of sand lifting in the locality. – Sun Photo