Tuanku Abdul Halim and the Raja Permaisuri Agong, Tuanku Hajah Haminah, arrived at the mosque at about 8.30 am.

The prayers were led by the Grand Imam of the National Mosque, Tan Sri Syaikh Ismail Muhammad, and Minister in the Prime Minister's Department Datuk Seri Jamil Khir Baharom delivered a sermon.

After the prayers, Tuanku Abdul Halim engaged in conversation with the worshippers, many of whom took the opportunity to exchange greetings with His Majesty.

Tuanku Abdul Halim and Tuanku Hajah Haminah had earlier granted an audience to Najib, Muhyiddin, Rosmah and Noorainee as well as Cabinet ministers at the Istana Negara. 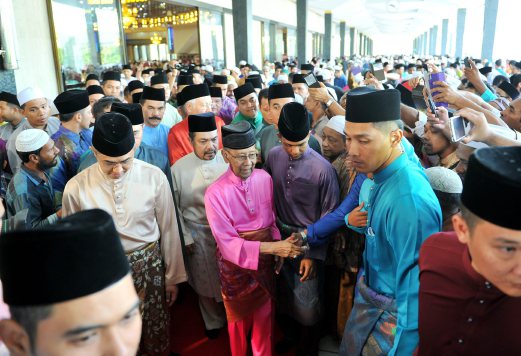 In his sermon at the National Mosque, Jamil Khir reminded the worshippers that Muslims were forbidden to cause enmity among themselves that could weaken relationship in the community.

Quarrelling among themselves would threaten solidarity in the community, undermine political stability and hamper national development, he said.

"Let's not allow self interest to overpower us to the extent of dismantling the solidarity we have nurtured for so long and gamble away our power and dignity.

"Muslims appreciate that love is being always open and having good thoughts and mutual respect for each other," he said.

Jamil Khir called on all Muslims to foster this love through friendship by visiting one another.

He said Muslims should remember that while they celebrated Aidilfitri with joy, some of their brethren lived in difficult conditions, alone and destitute.

"Our brothers and sisters abroad, such as in Palestine and Syria as well as the Rohingya refugees live in difficult conditions all their life and grow up in the midst of war," he said.

He called on all Muslims in Malaysia to do more good in this world and discard ignorance that contradicts the teachings of Islam.