In observance of the day on 21st November, the Bangladesh Embassies and high commissions organised various programmes and recalled the significance of the day.

The missions also highlighted the contributions of Armed Forces to nation building as well as to maintenance of global peace and security through participation in UN peace keeping operations. 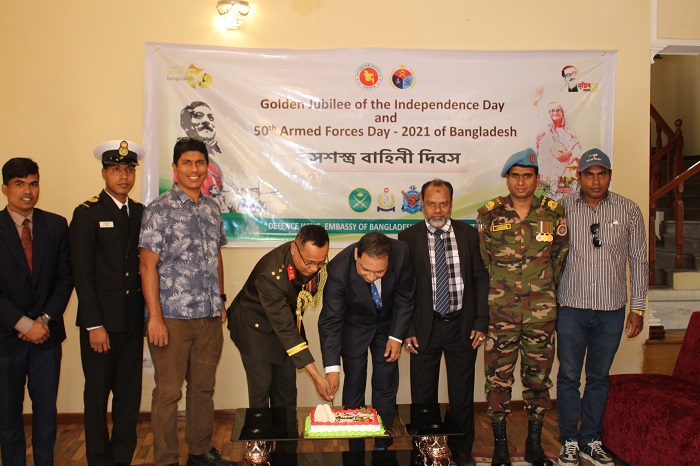 Bangladesh High Commission in Colombo observed the day with befitting festivity and grandeur on 21st November 2021. Defence Adviser Commodore Shafiul Bari hosted a reception followed by dinner in a local hotel to observe the day.

Defence Secretary of Sri Lanka General (Retd) Kamal Gunaratne along with his spouse graced the occasion as the chief guest.

In his speech as the chief guest, Defence Secretary Kamal Gunarantne recalled the glorious history of Bangladesh Armed Forces and their contributions to the liberation war of Bangladesh.

A good number of head Ambassadors/High Commissioners, Heads of International Organizations and Defence Adviser/Attaché of diplomatic missions Colombo and high-ranking officers of the Tri-Forces of Sri Lanka joined the event with their spouses. It was the first such programme organised by any diplomatic Mission in Colombo in the past two years.