In a rare gesture, Minister of Defence of India Rajnath Singh and Chief of three Services joined the celebration of the Armed Forces Day of Bangladesh on Monday.

Bangladesh High Commission in New Delhi observed the Armed Forces Day, marking the founding of Army, Navy and Air Force during the 1971 Liberation War of Bangladesh.

“This is the first time in the history since independence that the Union Cabinet Minister for Defence and all the Chief of military services of India joined to celebrate Armed Forces Day of Bangladesh,” said a top diplomat of Bangladesh Mission.

The programme gets very special heights due to the presence of Minister for Defence of Government of India.

The High Commission hosted a reception in Bangabandhu Hall of its chancery to mark the 50th anniversary of the Armed Forces Day by paying homage to the Father of the Nation Bangabandhu Sheikh Mujibur Rahman and the martyrs of the Liberation War of 1971.

This year Bangladesh is celebrating the ‘Golden Jubilee’ of its independence and the birth centenary of the Father of the Nation Bangabandhu Sheikh Mujibur Rahman.

Bangladesh and India are also observing their 50th year of diplomatic relation and defence ties between these two countries.

To celebrate this special day, Union Minister for Defence of Government of India, Rajnath Singh was present as chief guest.

The national anthems of both the countries were played. Defence Adviser at the Bangladesh High Commission Brigadier General Md. Abul Kalam Azad delivered the welcome speech. 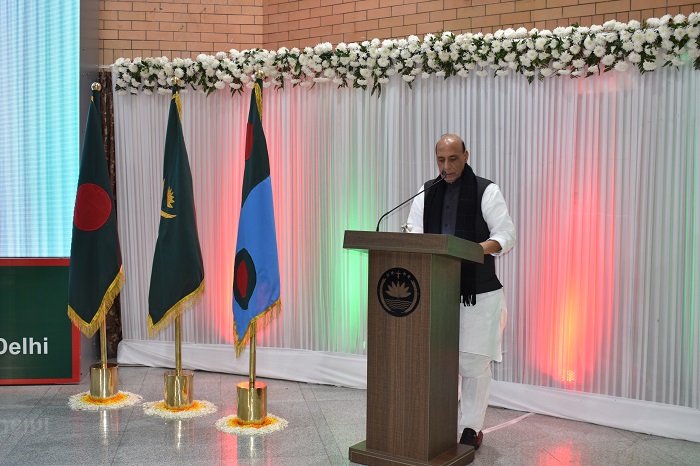 Speaking as chief guest, Rajnath Singh congratulated the Armed Forces of Bangladesh on the 50th anniversary and wished them the very best in their endeavour towards peace and security.

In his speech, he mentioned that Bangabandhu Sheikh Mujibur Rahman was the ray of hope during the war of liberation in 1971.

Under his (Bangabandhu) historic leadership the whole Bangladesh nation came together and fought against the atrocities of the occupied forces, Singh said and recalled the recent visit of Prime Minister of India Narendra Modi to Bangladesh during the celebration of birth centennial of Bangabandhu.

He further mentioned that the bilateral relationship between Bangladesh and India is now achieved the highest level and it will be strengthen till further.

“This year is of extraordinary significance for India-Bangladesh relations, as we commemorate the Golden Jubilee of the Liberation of Bangladesh, the fifty years India-Bangladesh diplomatic ties & the birth centenary of Banga Bandhu Sheikh Mujibur Rahman,” Rajnath Singh added.

In this momentous time, he salute the valiant struggle of the Muktibahini in the Muktijuddha – War of Liberation - in 1971.

“Spirit of Muktijuddha forms the core of today’s Armed Forces of Bangladesh.I also take this opportunity to pay my tribute to the sacrifices made by the brave soldiers of the Indian Armed Forces, who stood steadfast with their Bangladeshi brothers and sisters during the epic War of Liberation of Bangladesh.”

On this day, the Indian Defence Minister said he also remember the extraordinary leadership in India, which rose to the occasion against all odds and limitations in 1971, in support of a struggling nation fighting against the injustice and unspeakable atrocities perpetrated by the Pakistani Army. “It was a fight against an oppressive and undemocratic regime, which defied people’s mandate.”

“India gave shelter to millions of refugees even when we did not have enough for our own.  A struggling nation gave shoulder to another,” he said adding that the proud and professional Bangladesh Armed Forces of today owe their foundational values to the Liberation War of 1971.

He said it was the trials and tribulations of the Liberation War that saw the formation of Bangladesh Armed Forces.

“It is no coincidence that today the Armed Forces of Bangladesh are one of the highest contributors to the UN Peace Keeping Forces and are respected globally for their professionalism and commitment to just causes. I am glad that the cooperation between the Armed Forces of both countries is steadily progressing, by way of several activities - defence dialogue, staff talks, joint training, exercise and high level exchanges.”

It is remarkable that all three Service Chiefs of Bangladesh have visited India this year and from India, the Chiefs of Army and Air Force visited Bangladesh this year.  India has extended a Line of Credit worth USD 500 million to Bangladesh for defence equipment, the Defence Minister added.

High Commissioner of Bangladesh to India, Muhammad Imran also spoke on the occasion. The programme was ended by cutting of cake and a special dinner for the guests. 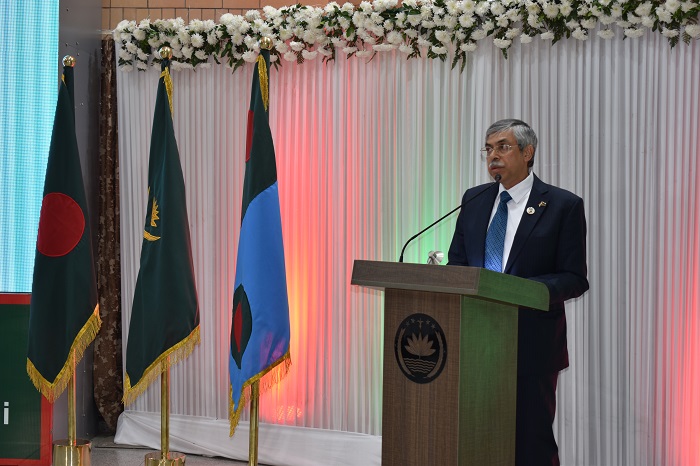