The Government of the Republic of Korea has decided to resume the entry of Bangladeshi expatriate workers to Korea which has been suspended since June last year due to the COVID-19 pandemic situation.

Korean Ambassador to Bangladesh Ambassador Lee Jang-keun informed this decision to Minister of Expatriate’s Welfare and Overseas Employment, Imran Ahmed during a meeting with the Minister at his office on Tuesday (Nov 9).

Ambassador Lee also requested Bangladesh Government to take necessary steps to ensure no COVID-19 positive case found among the Bangladeshi expatriate workers coming to Korea by taking necessary preventive measures before, during and after their travel including full vaccination.

Minister Imran, expressing deep appreciation to the decision of the Korean Government, assured of full cooperation with the Korean authorities for a smooth and successful resumption of Bangladeshi expatriate workers’ entry and re-entry to Korea. 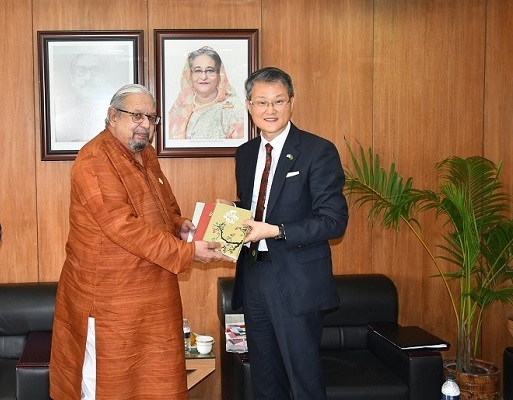 Korean Government has been admitting foreign expatriate workers from 16 countries including Bangladesh under the Employment Permit System (EPS) since 2004 and annually between 2000-3000 Bangladesh have been benefited under this program.

Currently the number of Bangladeshi workers staying in Korea under this system is around 7,500 which used to be over 10,000 before the pandemic.

During the 2020-21 fiscal year, the amount of the remittance by Bangladeshi expatriates in Korea recorded historic high with 209 thousand US dollars which made Korea the 13th major remittance source country for Bangladesh.