People from different walks of life took to the streets in various parts of the country on Saturday and staged protests against an attempt to assassinate Bashundhara Group Managing Director and Sheikh Russel Krira Chakra Limited Chairman Sayem Sobhan Anvir.

Police on Friday morning arrested a young man, Saiful Islam Saad, 23, from Sautul Quran Madrasah and Orphanage at Bashundhara Residential Area in the capital on suspicion of his involvement in a plot to assassinate the Bashundhara Group Managing Director.

It was alleged that Whip Shamsul Haque Chowdhury and his son Nazmul Karim Chowdhury Sharun masterminded the assassination plot due to previous hostilities.

According to reports reaching the news desk from different districts, people joined protest rallies and human chains and strongly demanded arrest and trial of the masterminds of the murder plot.

Speakers at the events said Sayem Sobhan Anvir is making contributions not only to the country’s economy but has also secured his own place in the international arena.

In Khulna, Mofidul Islam Tutul, director of Khulna Chamber of Commerce & Industry (KCCI), termed the attempt heinous and demanded that exemplary punishment be meted out to the culprits.

He made the demand while speaking at a human chain.

Recalling contributions of the Bashundhara Group Managing Director to the country’s economy, he aid Sayem Sobhan Anvir plays a distinct role in the business through inducting innovative ideas and updated technologies. “We urge Prime Minister Sheikh Hasina and the authorities concerned in the judiciary and administration to take necessary steps to bring the perpetrators to book,” Tutul said.

He also demanded a neutral investigation into the attempt on the life of the Bashundhara Group Managing Director.

If the attacker and masterminds of the incident are not arrested and punished, the businessmen will go on a tougher movement, he warned.

Former KCCI President SM Nazrul Islam said a vested quarter tried to kill Sayem Sobhan Anvir on several occasions. “Arrested Saad is mere a member of the big gang, which must be unearthed and punished.”

In Narsingdi, people under the banner of ‘Sacheton Nagorik Samaj’ (Platform of conscious citizens) held a human chain in protest against the attempt on the life of the Bashundhara Group Managing Director.

The participants demanded capital punishment of the perpetrators and masterminds of the heinous plot.

Speakers said if Whip Shamsul Haque Chowdhury and his son Nazmul Karim Chowdhury Sharun are not arrested, they will wage a tougher movement. 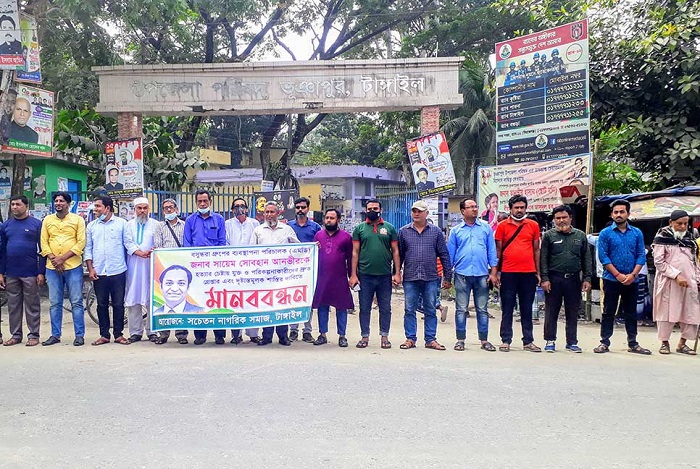 In Tangail, a human chain was formed protesting the assassination attempt on the Bashundhara Group Managing Director.

Speakers at the event demanded immediate arrest and exemplary punishment of the masterminds and instigators of the heinous act.

Principal of Govt Maulana Mohammad Ali University College Shahiduzzaman Mia said, “We’ve heard of several attempts and plots to assassinate Sayem Sobhan Anvir, a prominent industrialist, sports organiser and media tycoon in the country. This incident is reprehensible and atrocious. The trial of the offenders should be held after proper investigation.” 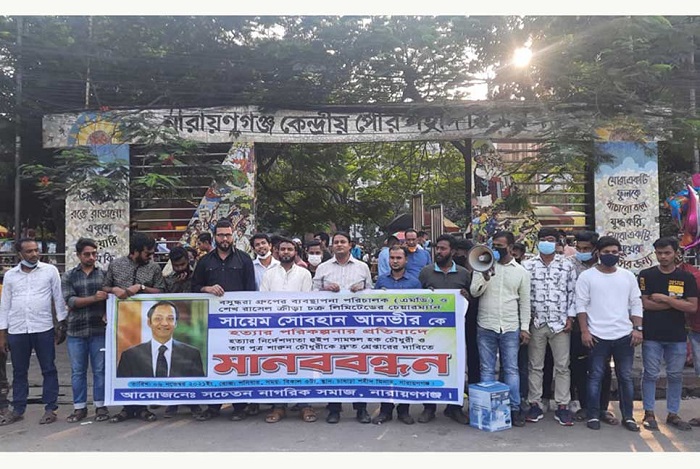 In Narayanganj, ‘Sacheton Nagorik Samaj’ formed a human chain in protest against the plot to assassinate the Bashundhara Group Managing Director.

Several hundred people took part in the programme held at the Central Shaheed Minar at Chashara in the afternoon.

Nagorik Samaj President Advocate Abdul Mannan and General Secretary Advocate Kazi Mamun were, among others, present at the event.

Speaking on the occasion, the participants demanded arrest of Whip Shamsul and his son Sharun who are the masterminds of the plot. 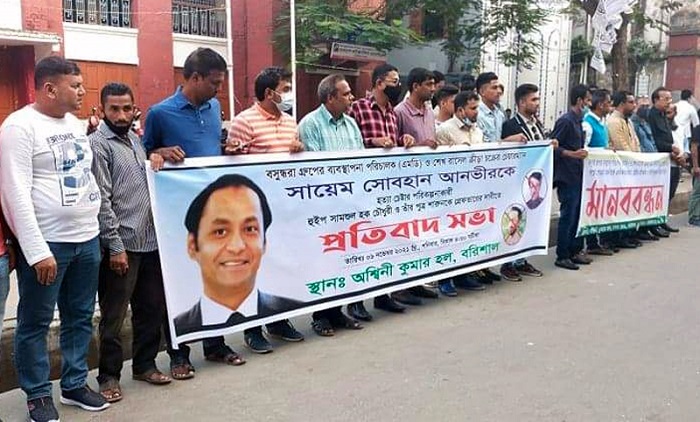 In Barishal, people from different sections formed a human chain in the afternoon protesting the assassination attempt.

The speakers demanded that security of the Bashundhara Group MD be beefed up and the people involved in the attempt to kill him be punished. 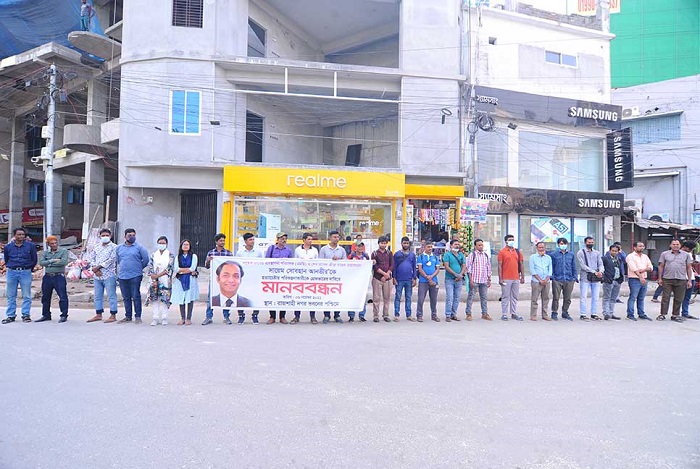 In Rajshahi, a human chain was formed in the city’s Kadirganj area at noon protesting the assassination attempt on the Bashundhara Group MD.

They said it is not enough to arrest just one person -- the masterminds behind it and the real culprits should be arrested immediately. 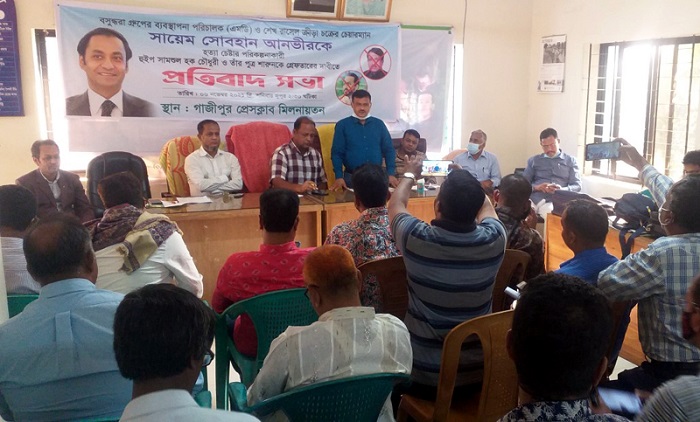 In Gazipur, a protest rally was held demanding arrest of those who were involved in the attempt to murder the Bashundhara Group MD.

The protest rally was held at the Gazipur Press Club at noon with its former President Md Khairul Islam in the chair.

The speakers said Bashundhara Group is the topmost industrial family of the country where thousands of people are employed.

Besides, Bashundhara Group is playing a vital role in real estate, economy, employment and the development of the country, they said. This industrial group stands by the common people of the country during different calamities and crises through providing relief materials.

Ataur Rahman Sonnet coordinated the rally where several hundred people took part and demanded arrest of Whip Shamsul and his son Sharun for their heinous act. 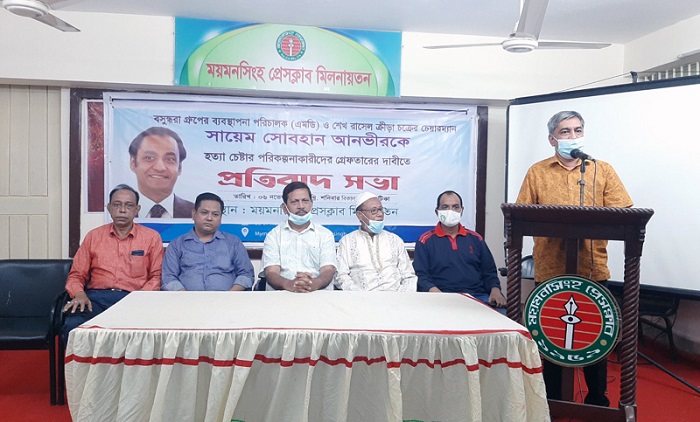 In Mymensingh, a protest rally was held with the participation of journalists and other sections of people on the local press club premises in the evening.

The speakers said Sayem Sobhan Anvir is an idol for the new generation while Bashundhara Group has enriched the country’s economy and created employments.

An attempt on the life of the Bashundhara Group MD is tantamount to attacking the country’s industrial sector. 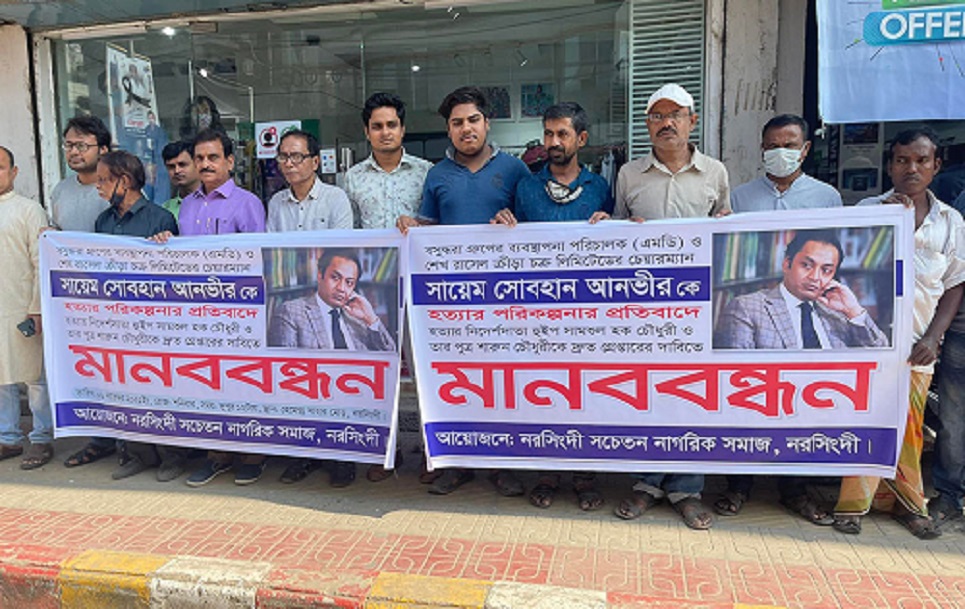