An amateur diver exploring shallow waters off northern Israel has found a sword thought to have belonged to a crusader knight 900 years ago.

The one-metre (3.3ft) blade was discovered by Shlomi Katzin in shallow waters off Haifa.

It is thought the sword, heavily encrusted with marine organisms, resurfaced after the shifting of sands.

The Israel Antiques Authority (IAA) said that once cleaned and analysed it would be put on public display.

The Crusades, which began in 1095 and lasted for centuries, saw European Christians travel to the Middle East to try and seize control of Jerusalem and other parts of the Holy Land from Muslims.

Kobi Sharvit, who heads the IAA's Marine Archaeology Unit, said the Carmel coast, where the blade was found, provided shelter for ships during storms throughout centuries of shipping activity along the coast.

"These conditions have attracted merchant ships down the ages, leaving behind rich archaeological finds," he said. 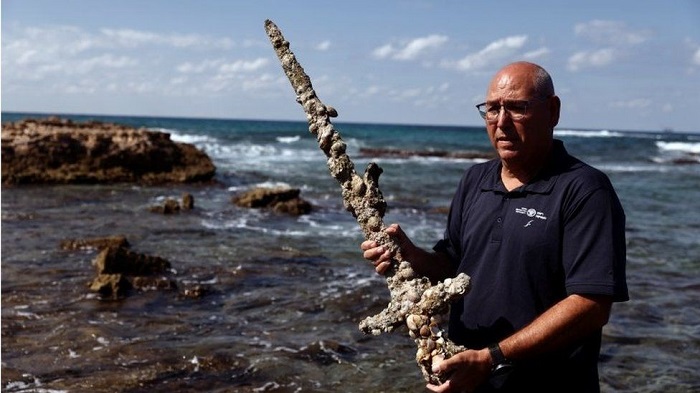 Researchers were assuming it might be linked to the nearby crusaders' citadel at Atlit, he added.

"It's heavy because of the stones that are glued to it and also because it's [an] iron sword and very big...

"That means that the guy that held this sword and [fought] with it was very strong. I'm trying to imagine him on the field with all the armour on him and the sword and fighting with it.

"He should really be in good fitness, maybe they were bigger than us today but definitely stronger. And it's amazing."