Foreign Minister AK Abdul Momen has held several high level meetings with senior ministers of the Serbian government and discussed wide-range of issues related to rejuvenation of bilateral relations, recruiting workforce from Bangladesh and enhancing trade between the two countries.

Momen held meetings with Nikola Selaković, Minister of Foreign Affairs, Ms. Darija Kisic Tepavcevic, Minister of Labour, Employment, Veteran and Social Affairs and Ms. Tatjana Matic, Minister for Trade, Tourism and Telecommunication of Serbia on the sidelines of the 60th commemorative events of the Non-Aligned Movement in Belgrade, the capital of Serbia.

During meeting with the Serbian Foreign Minister, Momen highlighted Bangladesh’s non-aligned foreign policy as envisioned by the Father of the Nation Bangabandhu Sheikh Mujibur Rahman.

While recalling with profound gratitude that former Yugoslavia was one of the first European countries to have recognised Bangladesh immediate after the independence, the Bangladesh Minister stressed the need to further strengthen the bilateral relations between the two countries.

The whole gamut of trade, investment, labour were discussed during the meeting, said a press release of the Foreign Ministry on Friday (October 15).

Momen informed his Serbian counterpart about the achievements of Bangladesh in containing the spread of the COVID 19 pandemic as well as its impacts on the economy of the country through early intervention and effective action. 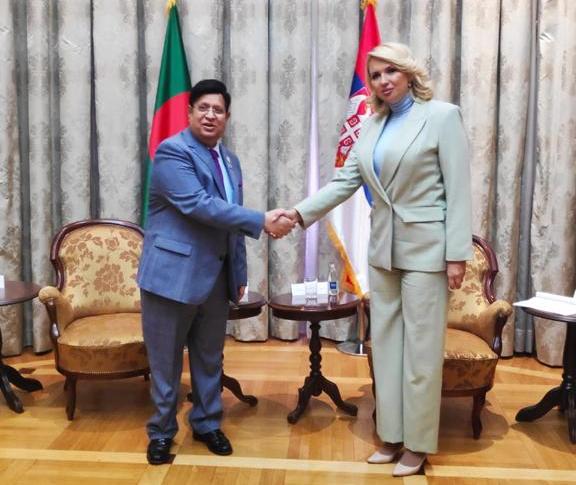 He also mentioned about our massive vaccination programme, which was highly lauded by the Serbian side.

On the 50th Anniversary of establishment of diplomatic relations between the two countries, Foreign Minister Momen emphasised on rejuvenation of the relationship between the two friendly countries. In this regard, he proposed to hold a Foreign Office Consultations which the Serbian Minister gladly welcomed.

Both sides emphasized on the early signing of the two MoUs on Visa Waiver in respect of Diplomatic and Official Passports and Defence Co-Operation. Both sides also discussed about the possibility of hosting joint celebratory events to mark the 50th anniversary of diplomatic relations.

The Bangladesh Foreign Minister sought support of Serbia for the early repatriation of the Rohingyas, temporarily sheltered in Bangladesh, to their homeland Myanmar. 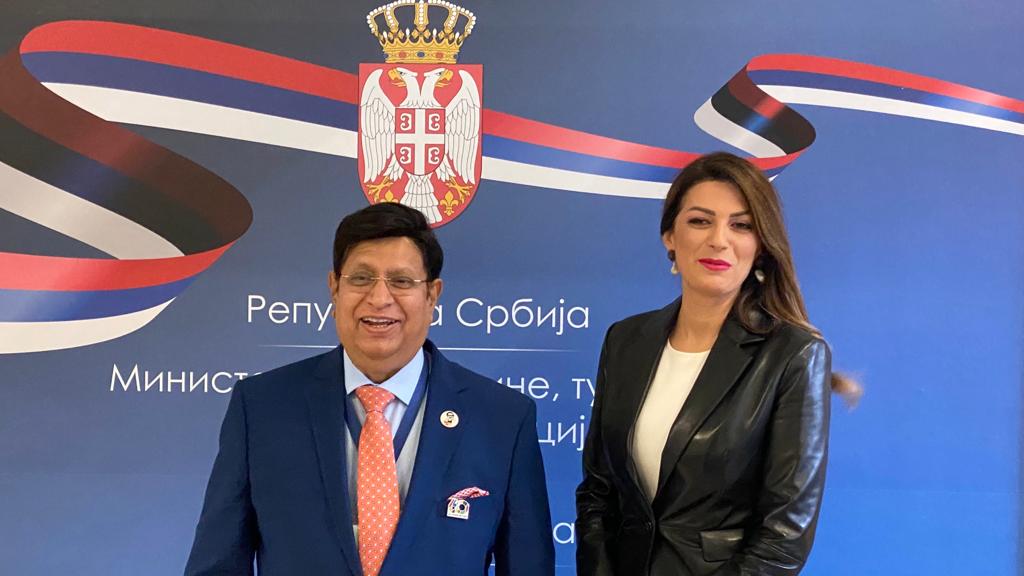 During the meeting the possibility of engaging Bangladeshi workforce in the development work of Serbia was discussed.

Bangladesh Foreign Minister informed the Serbian minister about the hardworking workforce of Bangladesh who are contributing to the infra-structure development of many countries including in the Middle East.

He proposed that Serbia can be benefitted from the expertize of Bangladeshi workforce specially in infrastructure development, health and tourism sectors.

The Serbian Minister welcomed the idea and recommended to work closely towards conclusion of a cooperation agreement in the field of labour and employment. The meeting also featured discussion on different socio-economic issues.

The Serbian Labour Minister was amazed at the remarkable progress of Bangladesh in women empowerment and girls’ education and highly lauded the political leadership of Bangladesh for firmly steering the country.

Earlier on October 11, Foreign Minister Momen held a meeting with Ms. Tatjana Matic, Serbian Minister for Trade, Tourism and Telecommunication. Terming Bangladesh “as a land of opportunities”, Momen highlighted the huge potentials to increase trade relations between the two countries.

He informed the Minister about the generous incentives offered by the Government of Bangladesh to foreign investors and invited Serbian business delegation to visit Bangladesh.